Whenever I watch a courtroom drama on TV the first rule for the lawyer is don’t ask the question if you’re not sure of what the answer will be. I’ve tried to maintain that philosophy since I started blogging in 2014. Write about what I know (which isn’t much). This is my story to tell from my perspective. The exception here is I don’t know ‘everything’ concerning this shining star of my story. But I’ll do my best.

Terry, one of my former classmates, started sharing posts from a young mom and dad who were friends with Terry’s son Justin (Justin passed away about 4 years ago). Aaron & Chrystal, their 2 children, Gavin and Alexia had moved from Iowa to Montana and Chrystal was pregnant with their third child. I’ve never met Aaron, Chrystal or their kids, and probably never will. Yet I feel like I’m a member of their extended family. Perhaps Evy’s odd, eccentric great aunt.

Although I only know a fraction of the story, nothing has piqued my interest or captured my heart with more empathy than reading the daily journey on little Evy (Evelynn). She was born in June, 2019. From what I’ve read, Chrystal’s pregnancy and Evy’s birth appeared routine. That changed one week later for this little peanut.

Medical personnel couldn’t pinpoint what was wrong with Evy, so she was airlifted to Spokane, Washington with an unknown infection. After thorough testing, a genetic defect was found caused by a mutation of the gene MYH7. Meaning where an A should be, Evy has a G. One of only 3 known cases in the world.

What this meant for little Evy’s heart in medical terms: non compact left ventricular dilated cardiomyopathy. Laymen’s term was just as chilling. Evy needed a new heart and was added to the transplant list. By mid-July accommodations were found for the family at the Ronald McDonald House because it was gonna be a long haul before Evy would be going back home to Montana. Evy was moved to a Seattle hospital awaiting a heart.

When I started following Chrystal’s story I was amazed how much knowledge mom expressed about all aspects/complications/medications on Evy’s condition. I didn’t know how to pronounce half the terms Chrystal was using as easy as everyday language. She was like Superwoman. Although she is remarkable, Chrystal’s also an RN with a bundle of degrees. Some of her heartfelt posts were upbeat accounting for small victories, others a bit discouraging (and rightly so). One day she’s advocating for a different size IV line, or pleading for a few more hours to see if Evy’s body will rectify something on her own before more pokes, prods and jabs. While none of these days have been easy, Chrystal has remained full of faith, knowing God’s got her back. That does not however negate her normal mom frustrations, anger, helpless, and hopeless feelings at times.

Mom’s posts usually include pictures of Evy or family members enjoying snuggle time with their dimpled, blued eyed doll. On particularly low days posts, she explained, “what I’ve chosen not to share is Evy, her skinny legs rigid, back arched, writhing in agonizing pain,” while I sob beside her because I can’t fix this. “I’m emotionally, physically, spiritually tired, and my soul is weary. But God is good. I will finish my ice cream, my popcorn and laundry because the hospital staff frown on nudity.” (What a great attitude Chrystal. Just when she felt empty and spent, God gave her a refill).

In September a heart became available and Evelynn underwent the transplant. There aren’t many posts where Chrystal doesn’t acknowledge and pray for Evy’s heart angel and her family. This holiday season is going to be especially hard on them.

By the end of September, Evy was on anticoagulant, anti-rejection and immunosuppressant meds (some of which will continue for the rest of her life). A few weeks later her surgical scar is barely noticeable. As time passes, I notice more of Evy’s personality starting to shine through. She’s got ‘this thing’ for maneuvering her nap blankie over her face (maybe trying to suppress the urge of those who are snapping pictures). She’s been pritnear naked (but for a diaper) most of her short life, and isn’t fond of wearing clothes, plus with all the lines and tubes virtually impossible to dress.

Evy’s worn newborn mittens to curb the yanking/pulling/ripping out everything foreign stuck on her face. She has become quite adept at removing the tiny oxygen tubes from her button nose. “I want my face naked just like everyone else!”

There’s been some highs and lows since Evy underwent surgery. She had to be intubated again for a spell because she’d become so distressed and inconsolable, she’d hold her breath until she turned blue/purple and pass out (which was terrifying for mom and dad). A cooling pad underneath her has helped a great deal. She also has severe acid reflux. Poor baby. Chrystal noticed one of Evy’s legs was swollen and the staff discovered an infection. Trying to wean her off some meds, plus adding others can be tricky and traumatic for everyone. Sometimes it’s one baby step forward, 2 bigger steps backwards, however Evy is making progress by leaps and bounds.

I don’t know all the technical terms but Evy is finally showing off her beautiful face, now completely unadorned of medical paraphernalia. No more yanking out her oxygen. They have transitioned from the intensive care unit to a regular floor. Mom and dad are working with Evy’s team to learn how to give her medications. And there’s a ton of them.

As soon as Evy is discharged, (and it’s getting closer) the family will not be able to go home. Sigh. They will live at Ronald McDonald House for several weeks, staying in close contact with Evy’s medical team as they tweak medications, and continue with her physical and occupational therapy. But there is light at the end of the tunnel as Evy adjusts to life with her new heart.

God equips people with special gifts when they become parents. I remember fretting about my kids when they were small. Chicken pox, measles, fevers, teething, childhood accidents. He gives us more coping skills and abilities when they become teenagers (because that’s when we really need them). But how do parents prepare/adjust when life and death issues spring up right after the happy occasion of welcoming your newborn? What kind of strength/faith does that require? I just can’t even imagine.

I look forward to reading more (maybe writing Chapter 2) daily posts on Evy’s story as she grows. My prayer is in the near future Gavin, Alexia, Mom and Dad will be playing in the backyard watching (tiny spice) Evy run around, squealing with delight. About the wonder of dandelions gone to seed, ladybugs, birds and mud puddles. May God continue to bless and hold this family ever close… 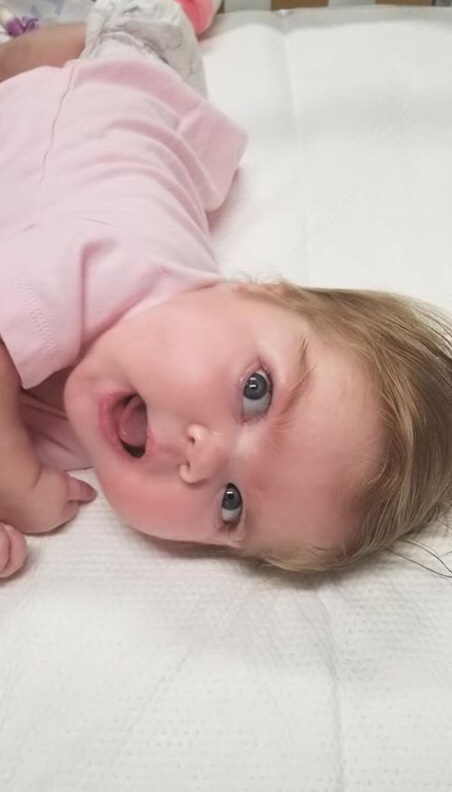