Magdalene Viola was born 109 years ago today. Wow! That’s hard to believe. And makes me feel ancient. Mag’s eldest child (Elenore) recently passed away just before her 89th birthday, so the dates must be right. Mag was my mother-in-law from 1969 to 1994. She would have continued in that capacity if she were still alive. 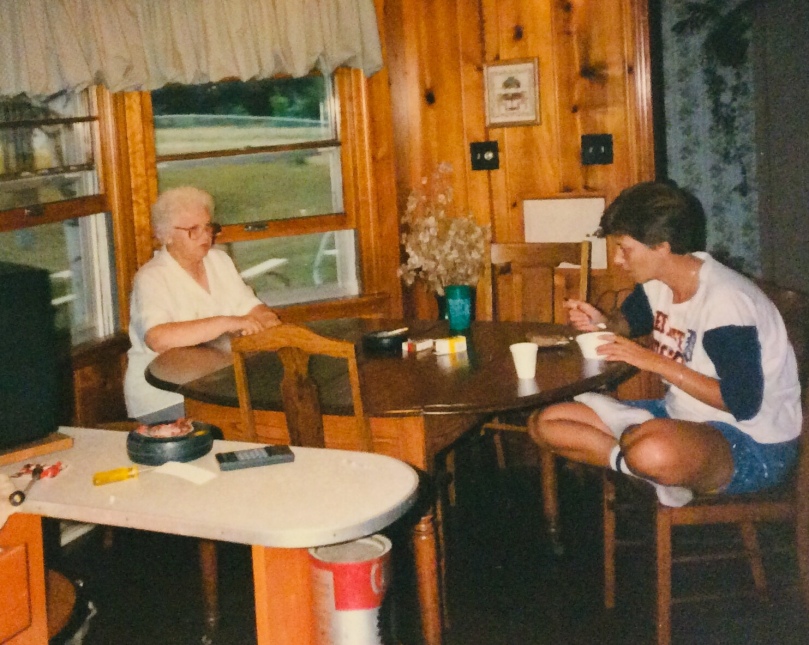 She was the oldest child of eight born to Ralph and Carrie. Seven children would make it to adulthood, losing a toddler brother with a ruptured appendix. Mag’s early years were a bit unusual. Shortly after Ralph & Carrie married in northwest Iowa, and were expecting Magdalene, Ralph up and left to herd sheep in Colorado. What? Odd for a couple of reasons. Why didn’t he take his new pregnant wife with him or at least wait until Carrie gave birth? What did Carrie live on? Did Ralph send money home? Did they write love letters? Don’t know the answers to any of these questions unfortunately, but if Mag’s next oldest boys (Jim & Les) have any insight, I’ll probably hear about it.

I think Ralph was awol from their marriage and parenthood for about 5 years. Guess the sheep all grew up and left the herd. Can you imagine that reunion? Might have gotten a warm reception from Carrie, but I don’t think Magdalene was very excited to meet a father she didn’t know at all. The marriage endured however, blessing 7 more children to this union.

I’m sure the dynamics changed drastically once Ralph reappeared and the family’s population exploded. Mag, older by several years was expected to help with the little ones, plus household cleaning and cooking. Whenever she spoke of her siblings when Hubs and I were around, it was with great affection. Not that she hung around home very long. She was in a serious relationship (engaged) when something happened and they broke up. She soon met Jim, the 2 quickly became an item. They got married on Jim’s 22 birthday in July of 1929. Mag was 19.

Jim & Mag were rather nomadic during the first years of wedded bliss. The early 1930’s, the height of the Great Depression. I think Elly was born in Sioux Center. For awhile they had farm in Minnesota which was lost under very questionable circumstances. Once they landed in the small town of Rock Valley, Iowa, they finally put down roots. Though they moved from one rental to the next (until they built their ranch in 1958) as their family expanded, they found no reason to keep looking for home. They had a home. It was Rock Valley.

Jim and Mag would similarly mimic Ralph & Carrie in the births and spacing of their children. After the birth of Elly in 1930 it would be about 5 years before James Roger would join the trio. Leslie Dale is 7 years younger than Jimmy. Only 3 years would separate Les and Arlyn, who was born in 1944. I’m fairly certain they thought their family was complete after Arlyn. Magdalene was 34 with a kids ranging from a teenager to a newborn. She needed/wanted to work to help out the family budget.

But there was one more hiccup in store for the Van Berkum’s. Exactly one week after turning 38, Magdalene Viola would give birth to Johnny Wayne. Surprise-surprise! His older sister Elly was 18 and graduating from high school soon. (This dude would become my husband in another 21 years).

John was more or less left to his own devices when he was growing up. Jim & Mag were working hard to provide for their household of 7. As a youngster John learned to cook his own meals. He knew more about cooking by age 10 than I did when I did when we got married. (I wasn’t really sure how to boil water in 1969. Or 1970. But I did learn-eventually. To boil water- and cook a decent meal).

It was far from Mag’s first rodeo when she became my mother-in-law in 1969. Elly had been married for almost 2 decades and had 4 children. (Their oldest son is a couple years younger than me!) Jimmy and Eleanor were married with 3 kids, Les & Mary Jane had been married for 4 years and just had their first daughter, Kristin. Arlyn, although 4 years older than Hubs got married shortly after us. Mag, the mother-in-law was the polar opposite of my Mom in most respects. Mag was happy to let John and I figure out our own marriage. She didn’t hover, wasn’t nosey, was happy to see us if we showed up on a weekend, but not devastated if we had other plans. She was simply living her life and letting us live ours.

After Mag retired she needed something to fill the hours besides making meals for Jim, babysitting for the grands and Bingo. She signed up to be a foster grandparent for children with special needs at Hope Haven. She found this job/mission/calling immensely rewarding and continued working for many years until her health (diabetes) started failing.

Mag was a good cook and terrific baker. As a rule, she rarely measured ingredients, but when she was in a teaching mode, would place her unique style on the shelf to speak in layman’s terms, scrounge around to find her set of measuring cups and spoons. All so this young, inept married girl could learn how to make meals for her baby boy. Happy Heavenly Birthday Mag. Hope they’re serving cake…