We all have them. Personalized, unique to our upbringing, environment, fetish-whatever. In my head I own my quirks. They’re part of what makes me-me. But when I think about them realistically, I realize it would be very rare for someone else not to share what feels like it belongs to me alone.

I’ve never been a very good breakfast person. I need to be up for several hours before I’m hungry and feel like eating. I do better when we eat omelettes, waffles, pancakes or eggs for supper than in the a.m. Big breakfasts often feel too heavy, like lead in my stomach throughout the morning. If Hubs and I are out and stop to eat during the in-between time, mid-morningish-10 to 11:59 I always opt for lunch if given a choice. John will choose breakfast 95% of the time.

I go to work early, either 6 or 7. To squeeze all our infant room caregiver’s lunch breaks in during a reasonable time frame, someone has to go first-and it’s rather early. Since I get up about 4:30, I’m starving by mid-morning, my usual break time. I have my lunch packed in the fridge, ready to go the night before. Not once have I ever considered bringing something remotely associated with breakfast fare to work. Spaghetti, beef stew, chicken corn chowder, shrimp cocktail, shepherds pie, and on rare occasions a sandwich (not much of a sandwich girl either). While the smell may gross out those in the hallway while I heat up my leftovers at 10 or 10:30, I have no problem eating supper food with a Diet Pepsi at this early hour. I’ve been up for 5 hours, to me it’s lunchtime. And a miniature Hershey Bar for dessert if I’ve got nothing homemade to fulfill my sweet tooth craving. 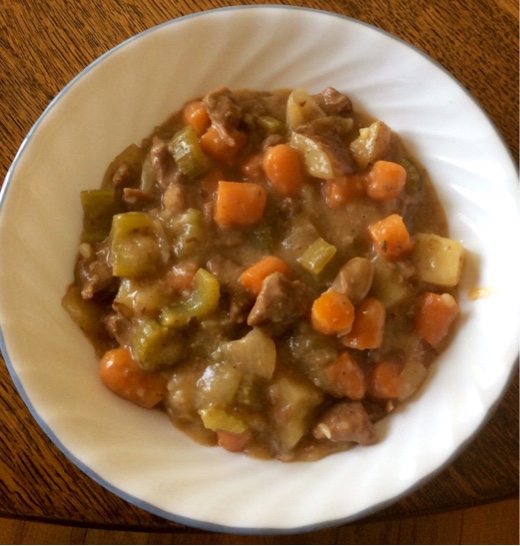 It wasn’t until I had kids I realized cold cereals was their top choice for breakfast. Early morning television programs packed with commercials vying for my kids to pester me non-stop. Snap, Crackle, & Pop, Toucan Sam, Tony the Tiger, the Leprechaun hawking their wares. Available in containers the approximate size of one of the smaller Great Lakes. One might think this would last 3 normal sized growing kids a month. Yeah, try 2 days. Three days max. Their role model in this venture was their dad. Maybe not so much Shannon but definitely Joshua & Adam. Grab a bowl designated for holding a double batch of chocolate chip cookie dough, pour cereal for roughly 3 minutes, add a quart of milk and viola’. Three minutes later, lather, rinse, repeat. Another 3 minutes, well, you know the drill.

I always gave them choices. Occasionally making French toast or oatmeal. When instant oatmeal packets became the rage, they became a hot ticket item some mornings, requiring only water and a minute in the microwave, thus my ravenous kids had another choice. These packets came (probably still do) in several flavors with bits of dried fruit that bulked back up with the addition of hot water. The Van Berkum kids preferred apples and cinnamon. But never just one packet, at least 2, sometimes 3. Pre-sweetened cereals were a huge hit, Lucky Charms, Count Chocula (gag), Cap’n Crunch, Froot Loops, Frosted Mini-Wheats (looks like a bale of straw, how un-appealing. John and Shannon used to fight over Frosted Mini-Wheats, and as adults have given each other boxes of it for Christmas over the years) plus Frosted Flakes (more on this one later). Still, all of them enjoyed Cheerios, Rice Krispies, Raisin Bran, Corn Flakes, Wheaties and the least appealing one-Grape Nuts (were they nuts? horrible stuff, looks like gerbil kibble). One weekend morning we might make waffles, pancakes or eggs, but the majority of mornings, cold cereals were preferred.

So back to this odd quirk of mine concerning breakfast foods. I didn’t grow up with boxed cereals in our house. I ate sliced bananas in a bowl with milk and sprinkled with sugar or Mom would peel and dice a couple of oranges in a bowl (sprinkled with sugar). Ruby red grapefruit, cut in half and placed in a small bowl. Mom took a knife, gently cutting between the pith and fruit all the way around, sprinkled the grapefruit with sugar. Using a spoon, I’d slide it down the side of each membrane section, then scoop up each tiny sweet bite. When the fruit part was gone, picked up the grapefruit half, tipped it sideways. Squeezed out the juice to fill my teaspoon a dozen times, then moving on to the next half. Oatmeal with milk & brown sugar or toast (not toasted too dark or it got tossed) & butter, topped with a mixture of cinnamon and sugar. (I’m noticing a common thread here, might have something to do with sugar). And yes, I’ve strived to keep my breakfast traditions alive with my kids and grandkids. (Plus Hillbilly Bread, butter, sprinkled with a half inch of light brown sugar. But not for breakfast, this delicacy was more like dessert). And now the kids have to eat it on my whole wheat bread. Leveling the playing field for the brown sugar. Of course I have their best interest at heart.

OK, I’m ready to divulge my quirk. This one belongs to me and me alone because no one else is weird like me. Wrong. A couple of weeks ago at work I’m feeding 3 babies breakfast in low-riding high chairs. Moms bring their food which ranged from yogurt to oatmeal to a cut up bagel. So I’m doling out small portions of bagel bites to one, but feeding the yogurt and oatmeal kids, while carrying on a conversation with Angie (the other breakfast weirdo in the world). Ang and I are talking breakfast traditions. I mention I don’t eat cereal very often, but when I do it’s an ordeal. As I described the steps taken to eat the occasional bowl (or bowls, I’m getting there) of cereal a knowing look crossed her face. Good grief, there’s another one in the world! I’m not alone. Thanks Ang, or maybe I should say-sorry.

I only eat 2 kinds of cold cereal. Frosted Flakes and Cheerios. The bowl for my cereal resembles an antique individual salt bowl. About 2 inches in circumference, and holds approximately 8 Cheerios, 2 Tablespoons of milk and a quarter cup of sugar. Seriously. Yes. I’m. Serious. All ingredients must be in place, close at hand before the ice cold milk is poured or I have to toss the whole works and start over. There is no book to read, my ever present iPhone and iPad are oddly absent. I will not be distracted by phone calls, conversations or eye contact. There is now only one purpose in my life. To consume 8 Cheerios, 2 Tablespoons of milk and a quarter cup of sugar BEFORE THE CEREAL GETS SOGGY. These 3 steps will be repeated for approximately 10 minutes, which equals a normal size bowl of cereal and milk. Sugar part, maybe not so much. But once I start, it’s all about getting to the finish line. Eating only crunchy, crisp cereal, nearly frozen milk and a heaping helping of sugar. Yes, one must have goals in life. And no, I don’t eat Life cereal. It’s not on my approved breakfast list… 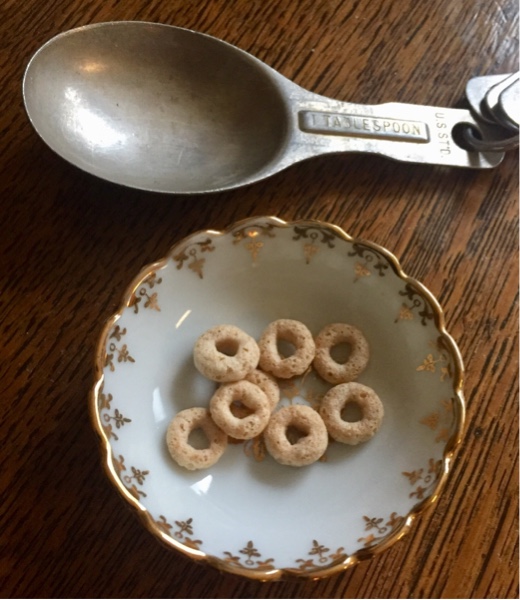