Couple weeks from now we’ll celebrate 2 years in our fixer-upper. Man has that gone fast. Partly because we existed in a three-year-time-warp trying to sell our North Muskegon house in order to move. But mostly because of all the things that needed to be done here-all at the same time. At first it was fun, picking out paint colors, appliances, light fixtures. Soon it became tedious. First thing every morning we’d stop at Lowes, Menards or Home Depot, with a revised list in hand. It was hard to keep our bubbling enthusiasm going. We wanted to be settled, finally done with our long list of to-do’s and hunker down for winter. 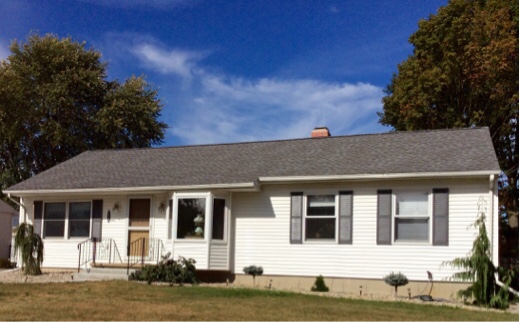 Except for the broken glass from the front storm door strewn all over the porch and yard, nothing got done outside. The door had to be replaced as it was hanging by one screw. Curb appeal ‘ya know? There was just too much to do getting the house ready to live in. We eliminated a third of our household goods from North Muskegon. It was after we moved everything (twice) when we realized we still had way too much stuff. But here’s the thing. I like stuff. Especially my stuff. Collections and antiques. It’s like comfort food, having familiar things I’m used to, in our new place. Familiarity felt good. Tasty.

So I crammed, stuffed, rearranged, moved, squished, squeezed all I possibly could into our little house. And felt pretty good about how the place looked and had turned out. My living room still boasted quite a few of my favorite antiques, plus a new Lazy Boy. Just for me. Somewhere to blog, have a cup of tea in the afternoon and not be bothered by the family room’s TV. Perfect.

Fast forward six months. Spring. The most popular sentence in our vocabulary is-holy hanna, the outside of this place is an absolute disaster! The worst offender was the broken, dilapidated blacktop driveway. Must be original to our 1963 home. Took up half of the front yard! Tore it out and poured a new cement driveway. Removed a tree that was bigger than our house and had some issues, new roof on the garage, replaced the central air, started planting grass, and pulling out the horror show of old landscaping. We were knee deep in outdoorsy stuff, (not my favorite) including 5 ton of river rock and landscaping shrubs.

One day John noticed something odd about the living room carpet. Suddenly it looked like undulating-amber-waves-of-grain (wheat color carpet). There were 4 or 5 little rolls/waves all over the room. Grabbed my phone, snapped a couple of pictures and headed back to the big box store called Home Depot. Waited our turn, stated the complaint, passed Adrianne my phone with documentation. She called her boss and they decided we needed to have the carpet stretched. Set up an appointment with the carpet layers. It was up to us to take out everything out of the living room and hallway. Ugh. It’s a small house. There’s not a lot of places to set large, heavy, imposing antiques. I cleared the stacking oak bookcase, filled with everything from soup to nuts. A virtual catch all of things near and dear. The china closet full of Blue Delft, emptied and separated by shelves. All my Isabel Bloom statues (each weighing about a ton). The carpet crew came, hauling some kind of machine to stretch, did their little job, vacuumed up the fragments and left.

Carpet looked pretty good. I decided to rearrange the room since it was empty. (Ended up doing 3 rooms). By now we had been here about a year. A couple antiques were just in the wrong place. From the get-go I felt the curved glass china closet should be by the dining room table, but it was a tight squeeze and begging for a chair to bump into the curved glass. Decided to put the smallest of the 3 curved glass pieces (yeah, I couldn’t get rid of any of them) in the dining area which sports my Waterford glassware. Hubs was feeling magnanimous and offered a wall to hold the biggest curved glass secretary in ‘his’ room. This one holds my Lladro pieces, which are statues of mostly soft muted tones of blues, white and grays. This works well with light gray walls and medium gray carpet in the family (his) room. The Blue Delft china closet would be home in my living room.

For the most part we were just actually living in our house. Oh, there’s still a shorter list of to-do’s, but nothing pressing. I want to take out the dishwasher (never use it) add a cupboard (which I desperately need), get new countertops, backsplash, cupboard handles (these are ceramic-with daisies, hut-fa-duttie) and a new sink. All in due time Neese.

But almost 2 years after moving in, Hubs was getting antsy. We have a 2-1/2 stall garage which is still pretty full. We’ve come to terms that our remaining antiques gathering dust and scratches out there are never gonna find a home in this house. The kids have taken several pieces but there’s still more. John is tired of parking his truck outside. (However, I have been able to squeeze my Jeep in the garage). Hubs wanted to buy a shed and plop it in back of the garage, which is really wasted space anyway. The price of the sheds he preferred are outrageous. He called Duke (our bathroom remodel guy) for a quote to add on to our existing garage instead. A deal was struck and construction commenced, albeit slowly. We weren’t in a hurry as long as it was complete before winter. Duke finished his part, now it’s John’s turn to tidy up, move stuff and clean up the backyard again. We’re determined to get the antiques sold and out of the garage this fall.

Seems like every time we get distracted with a project, something happens when we’re not paying attention. This time it was me who spotted the issue. “Hey John, what’s that bump in the carpet from?” Not again? Yup. Well shit. At least the 3 waves were in different spots, but again only in our living room. We bought 5 different carpets and spent the most money on the living room carpet. Go figure. More pictures and back to Home Depot. Adrianne (mumbling under her breath when she spotted us saddling up cozily in her work station) looked at the pictures, called her superior Patty again, hung up and said, “no, not this time. The carpet’s 18 months old.” “But you’re still trying to correct a problem from the initial installation, or something’s wrong with that particular carpet,” I pleaded heatedly. She looked at me sympathetically and dialed another number. Talked for a minute and said, “we just got a new assistant manager, he’s a good guy. He’s agreed to come out and take a look and get some of his own pictures. Is that ok?” “Sure, thanks for the extra effort Adrianne,” I said as we left.

One of the biggest ripples was right by the front door, which ordinarily is not used. When Paul (from Home Depot, not Jake from State Farm) stepped through the front door, he glanced down and said, “oh boy, I see what you mean. We’re gonna fix this. I don’t know if it’s the carpet or the way it was installed. I’ll have to figure that out, but we will fix this.” He called a couple days later, set up an appointment 3 weeks in advance to have the carpet re-stretched because they’d had no complaints on the carpet itself from other customers. Which meant taking out all the knick-knacks from the bookcase and china closet, moving those chunky Isabel Bloom’s and all the furniture. Again.

The china closet has claw feet with wheels, so it moves pretty smooth, but a couple of the wheels like to fall out when it’s rolling. The bookcase is just a pain in the ass to move. One of my favorite pieces though. Willed to me in 2008 from a feisty old gal named Mildred (one of my better stories titled Mildred & Charlie, October, 2014). It’s a 5 section stacking oak bookcase, each section comes apart and is a slightly different size than the next section. Took Hubs a couple of hours to figure out the sequence the first time. (The movers solved this dilemma by wrapping the whole bookcase in Saran Wrap and just picking it up). I asked Josh and Adam for their help this time. Adam agreed to move the furniture out, Joshua would come after the carpet was done.

Our appointment was on Wednesday. Adam ended up coming on Saturday night, after working all day at The Chop House in Ann Arbor. He planned on coming Monday to move things but Graham’s great grandma Betty had fallen and broke her hip. Meaning his grandma Karen (Betty’s daughter) needed to be at the hospital with Betty and couldn’t watch G on Saturday. We’re always happy getting that wonderful kid for an extra day. It would be silly for Adam to drive here to pick up Graham late Saturday night and not move the measly few big pieces rather than come back and do it sometime Monday. Still, meant an extra 2 days with living room furniture packed tightly in my small kitchen. Wednesday morning Hubs is expecting a call to set up a definite time, instead they call to reschedule for Thursday because someone called in sick. Dang it. I had hope to put everything back Wednesday night because great grandpa had 8 month old Jovi coming Thursday morning at 7. Plus now I had to ask Josh to switch days.

Josh was gracious and came over on Thursday, so it all worked out. I got home right after the carpet guys left, but did not start hauling the small stuff back in the room until Ari came to pick up Jovi. Josh helped move our fire pit in the backyard, got the big pieces put where I wanted (rearranged them again) and move the antiques in the garage so he and John could take pictures to advertise them. And of course he can now park in our garage. Finally.

John and I were surprised at how big the living room looked-empty. On one hand I love all my stuff nestled close to me. On the other hand, clutter makes me twitchy. What to do, what to do? I need balance people. Arms laden with load after load of miscellaneous momentos and small glassware pieces back to the living room, I might have found the perfect niche. I just had too much little stuff cluttering up the big pieces. My lovely antique oak library table was almost completely covered with little do-dads.

When I was in Paris this July, I bought one very nice (small) piece of Baccarat crystal, which I hadn’t taken out of the box yet. Why? No room or proper place to show it off. The time had come for the tiny crystal butterfly to emerge from its red box cocoon. I spotted a perfect home. On the oval library table, but minus a dozen knick-knacks of minor significance. Hubs noticed it walking through and said, “what’s that?” “Oh, the one good remembrance piece from Paris,” I replied. He countered with, “Cute, how much?” Luckily my memory tends to fog on such matters, though I tried to stay in the ballpark. Or the general vicinity of the ballpark. He flinched-visibly. (That right there was worth the price of admission). A couple hours later I was basking in my slightly trimmed down, minimalistic version of this new, tidy living room. The sun was shining and glinting off the crystal butterfly. “Wow John, the butterfly is simply stunning when the sun’s shining on it,” I oozed, mesmerized. “For that much money, the damn thing should fly,” he shot back…

2 thoughts on “The Trouble with Bubbles…”