I think I live in the present. I like the present, it’s true, everyday’s a gift. There’s enough ‘stuff’ in my life to keep me feeling busy and fulfilled. Yet as I age (could maybe slow that part down just a bit God) I find myself reminiscing/ remembering/thinking /reviewing/ times during my childhood. Not really dwelling on things, but definitely thinking about my past more than I used to.

One of the sillier memories that has niggled it’s way in my head the last few years is a supper Mom used to make. How very strange, yet it pops in my head ever so often. I’ve not enjoyed this particular meal for at least 50 years! You know how odd that is to even write? I don’t really think of myself as 50 yet, then I write about not eating something for half a century! Where has the time gone?

I believe Mom called it 7-layer supper, though I could have that mixed up with a 7-layer salad I’ve made for years, (Layers of chopped Iceberg, celery, onions, peas, mayo mixed dressing, shredded cheese & crispy bacon bits) but I don’t think so. I’ve asked for help/suggestions from my Facebook friends, many who grew up in the same small Iowa Dutch community, Rock Valley as me. Not much help except Lori Jean who remembers eating something very similar and Wanda who came up with a dressing her family used to make and eat. But it still wasn’t Mom’s salad supper.

First, let me tell you my perception of the salad supper I remember. We only had this during the summer. One might assume because it was a salad it would involve no cooking. During July and August in northwest Iowa, the temps run approximately as hot as hell (though Iowa’s humidity usually tops hell I believe). During the 1950’s and ’60’s, we had no air conditioning, thus Mom wouldn’t want to use the stove or oven many nights. Our kitchen was very small and the heat from our gas stove would fill the entire house in no time-flat. (Mom had a spiffy electric fry pan which cooked our supper many hot summer nights. It sat on the counter and she could pretty much cook our entire meal in it, so the stove would set idle).

But what I remember from the 7-layer salad supper required several pans and using all 4 burners. I’ve tried 4 times this summer to replicate that supper and my kitchen looks like a tornado struck when I’m done! And yes, we have central air. It’s a lot of kanooey. (Ka-new-ee, farting around and many steps). Because you’re cooking: 1. Hard-boiled eggs on a burner. 2. Potatoes, another burner. 3. Bacon on a burner. 4. Dressing on a burner. 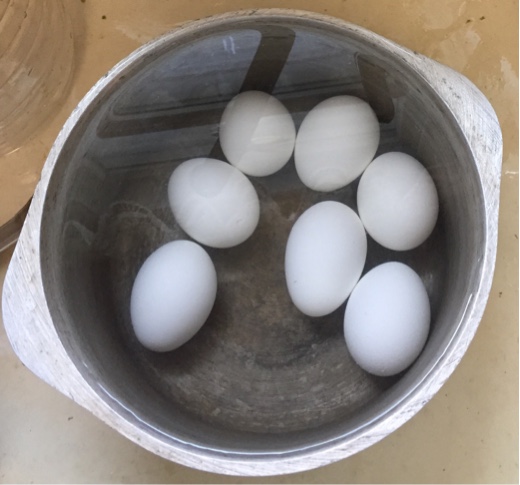 The real reason we ate the salad supper during the hottest part of the year is because the main ingredient is soft leaf lettuce Dad used to grow in our garden. Torn pieces of soft garden lettuce was the first layer on our plate. Can’t swear to it, but I know this meal included potatoes. Don’t think they were mashed, but diced very small or semi-smashed with a fork. (Hey, hey, stay with me on this one. You’re not the first person to go, huh, potatoes-nope they don’t belong. Hubs and Shannon think it’s a strange layer that should be eliminated but I cannot. Besides, potatoes taste good. I’ve been using redskins unpeeled, dicing them very small. So no, the spuds gotta stay). Topped with sliced hard boiled eggs and broken pieces of crispy bacon. Now I’m up to 4 layers which is all I can remember besides the dressing. Don’t really care about the other 2 layers, but it was the dressing that’s driving me NUTS! I remember it coming hot off the stove, kind of white/opaque with bits of bacon/drippings in it. Most of the suggestions did include some bacon grease/vinegar/sugar combination. Thanks Wan.

It’s early August and I’ve tried 4 various combinations of layers and 3 different dressings. I just keep adding more bacon each time to keep Hubs interested and satisfied. Really, can one ever go wrong by adding more bacon? I think not. Neither does John.

I’m now up to 10 layers in my salad supper, and still have not figured out which 2 might have been on my Mom’s special supper. I do know at least one that would not have been on her list however. Fresh mushrooms would not have made the cut with Mom. Don’t think she ever bought them or even liked mushrooms. She was a big casserole cook, but if a recipe called for Cream of Mushroom Soup, she would substitute Cream of Celery instead. I could see her adding baby peas or sugar snap peas, maybe slivered radishes which adds color. Or green onions. Just can’t remember what else was on my plate those nights. And I can’t say I ever remember her having green onions in the house, just regular white or yellow onions. I wonder if other families had a meal that was kind of their own? Not really a signature dish, but something unique in their household that was always just considered a regular meal? Until the kids grew up, parents passed away, and the kids, now senior citizens have nothing else better to do with their time than spend a summer trying to duplicate a salad dressing?

Ah, the dressing. A kick back to reality. I think I’ve found a dressing that is pretty close to the one I remember as a kid, that’s been stuck in my head for 50 years. The taste reminds me of Mom’s, though the consistency and color remain different. The way I recall Mom’s is more like a thick gravy. The recipe I like is much thinner. So I added another tablespoon of cornstarch to the one already in the recipe. Better, though I may continue to tweak the thickness, I absolutely love the taste. Oh my goodness, kinda sweet with a twang. By jove, I think I’ve got it…