Just a titch over a year. Wow, it’s gone really fast. I equate the 3 years prior like an uncomfortable, never ending 9th month of pregnancy. With the baby still snuggly inside and perched on your bladder. Kneading their tiny toes in it from all angles. Just testing your mettle to see if you could make it to the bathroom in time. Honing their skills with sharp elbows, knees, and feet, trying to earn a black belt in karate before the day of their birth. That one month lasts exactly 1,453 days. Hubs and I were so anxious to be gone from Muskegon. I feel kinda bad about that. We lived there for 21 years, but were ready to move after 18 years. For reasons I still don’t understand, we were literally stuck in North Muskegon for another 3 years. A dead zone.

Nobody’s fault. We just couldn’t get out of Muskegon. We had a lovely home with a lovely yard, on a lovely lake. That I grew to dislike. Which is the part that makes me feel bad. That home was part of us for the biggest chunk of our marriage so far. Adam was a sophomore when we moved, Josh was at Michigan State, Shannon was in her mid-20’s. A single mom to toddler Ari, they came often to visit on the weekends. But none of the kids ever felt that real tug of attachment to our lake house. That part of family life in a home with 3 growing children belonged to Spencer, Davenport and Jackson. That’s where we made the scratch marks on the doorways to show how much each of them had grown during the previous year. Heck, everyone but Adam was done growing by the time we called North Muskegon home. Ok, tiny fib. Fess up time. I wasn’t finished growing outwards, but I was done with the upwards part. Sigh. 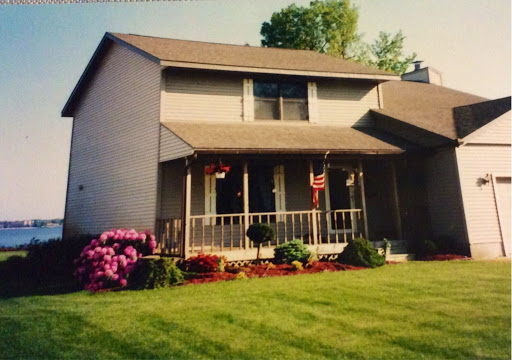 We did little else but drive across the state for one reason or another. Oh we wanted to do the things the drive required. Watch a middle school basketball game of Landon’s. Accept the invitation from Peyton to enjoy a program for (name a holiday). And we watched our youngest grandson, Graham, then a toddler at least once a month, sometimes every other week. Plus visits to Josh and Erica in Detroit or spend time with our oldest granddaughter, Ariana. But all these dear family members lived between 150 and 175 miles east of us. Every one of them.

I want to be able to look back, and reminisce about the years in North Muskegon without these negative feelings I still have about living there. Waiting for that stuff to pass. We had some great years there, but by the time Uber-realtor Mary finally hooked up the SOLD sign, we were so far past being weepy or sad about leaving. We just wanted to get the heck out of Dodge. My hope is after awhile the memories I conjure up will be of more happy times. Family get togethers, working at McDonald’s, visiting the elderly and enjoying our nice lake home. But those warm fuzzy feelings haven’t hit me yet. Still, better than lamenting an unwanted move and being miserable about it.

Which brings me to the present and our little house. I guess the reason the year went so darn fast is because we didn’t stop working on the joint for 2 minutes. Just so much to do, before and after we moved in. We knew several years ago if and when we ever moved, we were gonna do a smaller house on one level. I really wanted a condo but Hubs was not yet ready to give up all that fun stuff I call yard work. Crazy goofball. Well, if it was going to be a house, then the yard had to be smaller and easier to take care of. Living on a lake was quite a bit of work. In and out with the dock every spring and fall, upkeep on the sea wall, hard water rust stains, sprinkler heads needing to be replaced. Constant care to maintain green grass (John is anal about his lawn with nary a weed) on 4 inches of topsoil over sand, sand and more sand. With just as many spiders as grains of sand. The spiders never bothered me too much as long as they were smalller than the bottom of my shoe. Once in a while it was hard to tell as they often wrapped all 8 adorable legs around the sides of my shoe as I squished them hard enough to crack the cement driveway.

So we bought a small ranch in a quiet neighborhood just east of Jackson. It’s very close to where we wanted to be. I would have preferred to be another 15-20 miles east, but I swear every mile east from here is another 10 grand per hundred square feet. Insane. Ann Arbor is one of the most expensive cities to live in or near. We got a lot more house the closer we stayed to Jackson. Since we lived in Jackson from 1987 to 1994 before we moved to North Muskegon, we knew the area and have friends here. It was a good choice and fit.

But it was our second choice. We bid on another house a few miles away first and both really wanted it. It needed about as much work as the one we got. The yard was about twice the size as this place, which made me hesitant for all the work that part would entail. For John. Made it clear decades ago, I don’t do yard work, unless I’m forced. I don’t know how to start the lawn tractor or the snow blower. Never used either one and I’m fine with that. Actually kind of smug about that strange fact. I do a lot of stuff inside the house. If I’m outside, you can safely ascertain, I’m not working.

I liked the layout of the the other ranch better when we were bidding. Since we’ve lived here for a year, I may have changed my mind. The other house had a bigger living room. But no family room. After living in our lake home for 2 decades and virtually using the formal living room only during Christmas season, I thought I was ready to give up that seldom used space. The house we bought has a living room and and a family room. I’m kinda surprised to find myself spending some time each day in the little antique filled living room. I read the morning paper, blog, take a power nap after work in it. After supper I’m in the family room with John. It seems to work for us.

You ever put on an old shirt you wore several years ago? Sometimes it’s kind of an uncomfortable feeling. The back across your shoulder blades seems unusually tight. You keep wanting to pull the sleeves down a little, they’re just not long enough anymore. You tug at the front of the shirt because your unattractive muffin-top shows off the rolls of your belly that you swear weren’t there just a few months ago. That feeling is similar to one I experience once in a while about our house. I’m gonna burst out of this house completely because it’s just not quite big enough. I want the bedroom to be a couple of feet bigger. More walking around room because I’m selfish and have insisted on keeping too many antiques. Plus I’m still missing the one antique I swore would fit at the end of our bed. Well it doesn’t, unless I want to climb over the bed to get out of the door. The kitchen can drive me a bit batty when I’m in the middle of a baking or canning spree. There is literally no more room. I cannot find one square inch to put another baking sheet of cookies or 7 jars from the canner. If the family room was just another 2 foot longer, or wider, the humongous flat screen would appear less domineering (that’s my job). It’s like Lou Ferrigno as The Hulk. Busting out of his little Bill Bixby denim shirt.

But those ‘wearing a shirt that’s too stinking tight’ are rare occasions. For the most part, I smile everyday and thank the good Lord the house in North Muskegon finally sold and we are here. Close to the family. We can watch Peyton in choir, volleyball or ballet. She’s dancing in The Nutcracker in a couple weeks. Enjoy Landon’s sporting events. His first basketball game is in early December. Not to worry, I’ll keep you posted. I’m giddy with anticipation. Or I can hop in the car for 30 minutes and be at Adam, Graham and Sarah’s house. A bit longer and we’re at Josh & Erica’s new place. Here. Right here. It’s a smaller world after all. And I’m loving it…

One thought on “Small World…”