Hey Sports junkies, I know it’s been awhile. You didn’t expect to hear from me until Landon’s (Drew to the rest of the world) regular basketball season starts later this fall. But there’s stuff you gotta hear, and I know you’ve been waiting impatiently for an update about our favorite basketball player.

During the off season, (there never really is an ‘off’ season for Landon) he played in an AAU (Amatuer Athletic Union) for the second year in a row. A conference out of Cleveland (3-1/2 hours away) with some pretty awesome basketball talent. And some mighty big egos. His coach both years had been LeBron James’ coach in junior high. But this year Coach Ken just seemed tired. His heart and head were not in the game. Landon’s dad, our son-in-law Tracey ended up coaching several times, which was great. He’s very good at mentoring kids right along with coaching, and still enjoys all aspects of the game. But the turnover rate on Landon’s team was tremendous. Egomaniac # 1 (of course not my Landon) sincerely thought he was much better than the rest of his team-combined, thus moved up a grade division to the 16U’s (that’s 16 and under, Landon’s team was 15U). Thank heavens. They won more games after he moved on to greener pastures. Honestly he’s not that good. Maybe I’ll be eating these words down the road. We’ll see how he does in college. Anyway he’s not my concern, only fretting about my main man here.

One week the team would play great and win the whole tournament. The next week three new players would show up. The team would struggle and be out of sync. Hey, it’s summer, families have plans too. It can’t always be just about basketball. We only saw Landon’s team in 3 tourney’s. It’s WAY different than high school basketball though. Much looser and not nearly as many set plays. For the most part, the team, coaches and fans watching seem to thrive on the spectacular shot. Much more than being a cohesive unit. I’ll admit it is exciting to see a 14, 15 or 16 year-old dunk the ball that rivals the NBA. But for me, meh, I want to watch Landon handle the ball, march it down court, run the floor setting up a play. Probably just the ‘gram’ part showing. After the summer AAU season was over, Landon had a short season with his Pioneer team and lots of basketball camps and showcases.

Around this time Landon’s left foot began to bother him. Again. Very near where he suffered a stress fracture a couple years ago but was not correctly diagnosed until last Christmas. Causing him to miss several weeks of his season (and breaking my heart). This time he went to a specialist at U of M. The doc seems to knows his business and ordered an MRI. We were so relieved when it was not another stress fracture. It is however, a hairline fracture a couple of tootsies away from the old injury. Well shoot. Good news: it happened way before his regular high school season starts. Bad news: it will take about 8 weeks to heal, four of which will be no weight bearing at all. Good news: Landon was ‘this close’ to starting football. Now I don’t have to worry about him for that little injury prone sport. Bad news: specialist wants him to use a machine to help heal the bone, the cost is astronomical. More bad news: according to Landon, he has to wear ‘ugly as crap orthotics, and I am not doing it.’ Good news: it’s only 4 hours a day, so he can fulfill that little obligation in the privacy of his home. Trust me, he will wear it 4 hours if I have to hot glue it to his foot every day. If only Oral Roberts were still around. Anyone remember watching him on TV? He’d smack the afflicted on the forehead and yell, “heal!” I’d better stop ‘spuuting’ (making fun or mocking religion as my folks used to say with their Dutch slang words).

There are scores of sports ‘experts’ who keep track of how top players are doing in their respective positions. Hard to believe, but I guess these dudes somehow make a living at it, or totally have no life outside of basketball. One would assume by top players, their main concern would be this year’s crop of high school seniors, but that’s not the case at all. They start tracking these kids when they get in junior high. As in seventh grade. Alrighty then, re-read the sentence about having no life outside of watching basketball. And I’m sure this goes for all sports that our kids participate in.

A couple weeks ago I got a text with an attachment from Shannon. Some kind of basketball list for the class of 2019. I recognized one very familiar name by number 5: Landon Lowder, So (sophomore) PG (point guard). “Wow, that’s amazing,” I texted back. “Who did this, and are all the boys from mid-Michigan?” “Ah no,” she wrote back, “only Landon and number 8 are from the whole state of Michigan. The rest are from all over the country.” Me: “you’re kidding right? This Highschool_stars1 group think Landon is the number 5 point guard in the country for the class of 2019? H.O.L.Y. S.H.I.T. 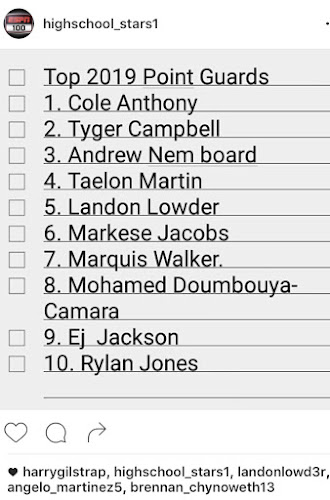 Wait, it gets better. I know, I’m giddy too. A couple days later an organization called ‘Bank Hoops’ listed Michigan’s top 30 college prospects by position for the class of 2019. Landon’s listed as number 3 for point guard. I wonder if grade point average figures into this equation at all? Landon does very well in his studies. My oh my. Can he live up to all the hype? Well, I think his head is screwed on pretty straight these days. Time will tell. He needs to get serious and be committed about healing his foot. Even if it involves ugly orthotics for a month. Geez. Sometimes he acts like he’s 15. Not for much longer though. His 16th birthday is on Sunday. Another thing for me to stew about. He’ll be driving. Watch over Landon for me God. Keep his head in the game when he’s on the road.

One last thing. You know Landon was born with allergies up the wazoo. Milk, eggs, chocolate, beef, nuts to name a few. Sounds miserable because most of us are used to eating all these things. (Really, chocolate!) But Landon has never known any different. He loves and devours chicken, turkey, and all cuts of pork. Makes turkey burgers regularly. Eats candy, Skittles, taffy, jelly beans, Mike and Ike, Anise, but nothing with chocolate. Not even tootsie rolls. Sigh. Still, he seems no worse for the wear. Carries an Epi pen, takes Zyrtec from March through December. Shannon and Landon recently had his annual appointment with his allergist. Time for some routine allergy testing. Tests showed no allergic reaction to eggs. To be sure, doc tested him a second time. Nada. This was indeed good news. Shannon dropped Landon off at home and proceeded to go to work. Landon focused on discovering the many ways he could enjoy the incredible, edible egg. Kind of like Bubba’s array of shrimp dishes in Forest Gump. Landon ate them scrambled, poached, and fried. Then hopped on the Internet, found a recipe for Egg Drop soup. Made a quart of that and scarfed it. Shannon came home, found one very full teenager, and nary an egg in the house. Reminded me of one of my favorite movie stars when I was a teen. The movie was Cool Hand Luke, with hunk Paul Newman, during his endless scene of eating hard boiled eggs. Seems these days it’s Landon. Any which way there is to serve an egg, Landon’s gonna make it and eat it. Soon as mom buys some more…