I wasn’t always like this. The mere thought of going on a trip used to fill me with delicious anticipation. Giddy, I’d mentally click off my fingers how many days we would be gone. Six days. No cooking for 6 whole days. No cleaning, no beds to change, no homework nagging, no laundry. Well, probably laundry when the kids were small. But I loved taking trips-anywhere. We didn’t get away that often. Money was tight on one income with 3 kids. Most trips were to Rock Valley, where both sets of our parents lived. Getting up in years, there was some sense of obligation that we go home when we had time off. Didn’t matter cause I was not cooking for 3, or 5 days. Sometimes even a week!

I’m getting old. Sigh. Normally that doesn’t bother me, but some things make me feel all-fuddy-duddy. I love being home. Why is that? A couple months ago we were gone for 8 days. Which was 3 days too long in my book. Plus it felt like 3 weeks. I like my own bed, I love my shower and my all time favorite spot, my “nest.” My wonderful “home within a home” where I sit when I write, read, gaze at the lake, watch some light-hearted fare on the tube, Walking Dead, Sons of Anarchy, or Justified. Anything and everything I might anticipate wanting or needing, my blankie, phone, iPad, Nook, chargers, notebooks, pens, scissors, nail clippers, file, tootsie roll pops, band aids (you just never know, I have that scissors nearby) calendar, TV guide, Kleenex, napkins, in the next few hours is semi-neatly stored around this small area for a very specific reason. NOT GETTING UP AND LEAVING MY NEST. If only I didn’t have to pee. (My little corner of the world) 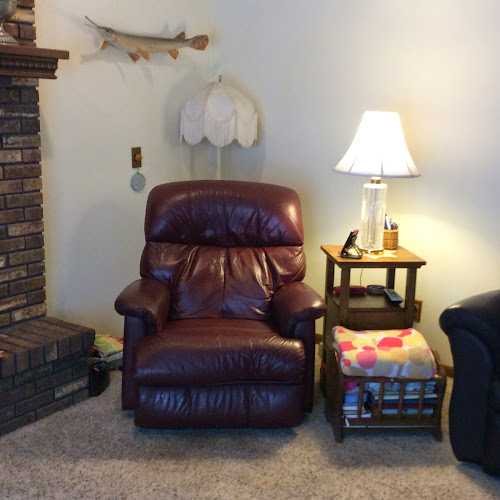 Lately though, when I’m gone I miss my kitchen. Odd. I miss my food. Even odder, or is it more odd? (How did that happen? The girl who couldn’t boil water) For the last several years I just don’t find restaurant food very appealing. Did I change or the food? Maybe I never noticed subpar food, or higher prices. Years ago, if I didn’t have supper started, or at least thought about during the day, and John happened to call with, “what ‘cha got planned for supper?” He would ALWAYS suggest, “let’s go out and get a sandwich,” and I was game. Anymore, not so much.

My kitchen. The realtor says it’s dated, but I love being in my kitchen. Even though the small tile countertops (my least favorite part) are just awful for a baker. Tough rolling cut-out cookies or pie crusts. Let the next owners change them, we’re moving anyway. And don’t freak out on me about my kitchen. It’s looks this neat for one reason. Showed the house today. I was forced to rent a crane yesterday to clear the counters. All my usual counter crap will be back in a day or 2 tops. Sneaky little kitchen poltergeists.

Part of the problem was a big change in our finances after 2007. John bought a small manufacturing plant in the late 90’s. Was doing great, initially having only 2 employees, increasing that to about 30 with 2 shifts running. I was working part-time, kids had all graduated from college. John’s company had just landed a huge contract. The job would consist of making thousands of parts for one of the Big 3. He had purchased and installed new equipment and was ready for a run-off when the bottom fell out of the market in 2008. The company who had given him the contract called and cancelled their order. Dismal times around here, let me tell you. They weren’t going ahead with the project because of the recession. John had a million dollars worth of new machinery sitting on the floor of his 35,000 foot factory. Not making one stinking part. Should he have sued? Certainly, he had a signed contract. But it would take years and hundreds of thousands of dollars in lawyers fees we didn’t have. He limped along for a few months, finally closed the doors and filed business bankruptcy. Not exactly the place you want to be when you’re 60. Thus all fun spending money just disappeared. We had gone to a movie every Friday afternoon for the last 10 years. Plus ate out at least once a week. Thought I would miss those things a lot, but lo and behold I did not.

I really did miss being in my house alone. I was used to being home by myself. I’ve always been pretty happy and content with my own company. Suddenly there was this guy here. ALL. THE. TIME. Thought he would drive me stark raving mad. Um, he did at first. John wasn’t really a homebody, especially if he was here by himself. I was working, but we were still together a lot. It took some time, and ever so much patience on my part, (martyr that I am) but we both changed I guess. He didn’t drive me bonkers too often, and he actually learned how to enjoy being here. I’ve always thought of our home as “my sanctuary.” It like calls to me when I’m away. Almost like a magnetic pull. It’s that strong. Don’t know if I’d go that far to describe John’s feelings about home, but he certainly grew more comfortable here. When I was working he often would have supper ready when I got home. He’s a good cook (messy though-I swear he shakes the salt, pepper and spices from 4 feet away). Plus uses every dish, piece of silverware, pot and pan until the cupboards are bare, and the countertops cannot be seen. Since I retired last year, I sign up most nights for supper duties, though he does take a turn now and then. We rarely go out and I don’t miss it.

Back to our trip. We were gone 8 days. We had 1 dinner and 1 supper with family, the rest was restaurant fodder. Three days breakfasts were free with the hotel room, and not too bad. You know the drill, a waffle machine that has to be flipped before that dang timer will start. Baked eggs, sausage links, bagels, some fresh fruit, assorted cereals. A couple hotels actually had strawberries for my waffle topping, a favorite of mine. So 8 days, 3 meals a day, total of 24, minus the 2 good family food fests. Take off the 3 freebies, and a couple days we had that breakfast late, so no lunch, we’ll go with 17 meals out. Three were way above average. Archie’s in LeMars was terrific. I don’t think I’ve ever had a below spectacular meal there. Doon Steak House was excellent, and a Mexican place (name escapes me) in Arnold’s Park was very good too. They even had live entertainment (as opposed to a dead dude shuffling through the dining room) which was fun. Guy doing card tricks. He was funny and pretty good. That leaves 14 lousy meals. Ugh. Here’s a perfect example. Stopped at a Chinese restaurant in Sioux Falls. Something Bowl, think it might have been Toilet. Started off by ordering sizzling rice soup for 2. NORMALLY this is kind of a clear, savory broth with small shrimp, chunks of chicken, some veggies brought in a large bowl to your table. NORMALLY the next step is some frozen fried rice dropped in the hot soup so it kind of sizzles. That’s how they got such a clever name. This is where our sizzle-less soup fizzled. TOMATO based broth was thick, (not a good start) and the taste was very sweet. It did have shrimp, but they had all died a terrible death from sugar poisoning. We each ate a spoonful, looked at each other, thought, well we blew 8 bucks on horrible soup. The waitress saunters over, “Is everything ok?” “Ah, no, the soup isn’t good. It sickeningly sweet, and what’s with the thick tomato gravy-like broth?” “Well, if you wanted clear broth you should have order the chicken sizzling rice.” Thanks a lot Sista. We pushed it aside, said we didn’t want it. She glides back a minute later with a carry out container for the soup!! What? Told her to please dump it, don’t waste a perfectly good container. It seems the more I eat at home, the less satisfied I am when we eat out. The prices are high, and the food rarely up to my expectations. Plus the portions are too big. Something else I don’t need. I’ve never been a great egg cooker. That’s why I’m not a short order cook. I don’t care what you call it, over easy, over medium. I want my egg: egg-white cooked firm all the way through, and the yolk runny. That’s the way I explain it to them. I find runny egg-white totally disgusting. If you can’t fry my egg that way, don’t be a breakfast cook. There, one dilemma solved.

When we finally got home, (happy-happy, nope I didn’t even mind all the laundry) I made a beeline to the freezer in the garage. Took out packages of stew meat, chicken wings, and boneless pork chops. First day home, made crock pot beef stew, good old comfort food. Although being home should have been comfort enough, the stew really helped. I can eat that stuff in August, heat wave or not. Next day I did wings with cole slaw, followed by one of my favorites, pork chops with wild rice.

All this makes me feel bitchy, disgusted, whiney, unhappy with restaurants in general, and traveling too. How come I feel so much better when I’m home than when I’m out and about? Am I the only one that feels this way? I used to love to go places. I don’t want to feel like this when I’m on a trip. Or even just going out for supper. How can I be as enthusiastic while traveling, and eating out as when I’m in my own little house? Maybe I could be comfortable traveling if I could drag along my kitchen, bedroom, shower, and especially my nest. John’s clever and really handy. Wonder if he can devise a way to haul half-a-house with us when we travel? Maybe then I’d be a happy camper. My über-fabulous master bedroom. Not going to be easy to replace that room and I’m gonna miss it a lot….

One thought on “Homebody…”