The title is deceiving. This is mostly about one of my dearest friends. Her real name’s Mary Ellen, but that was just way too much name for her in my book. I nicknamed her “Fred” soon after we met.

The year was about 1981. We were living in the Quad-cities, consisting of Davenport and Bettendorf on the Iowa side. Across the Mississippi in Illinois were Rock Island and Moline. We were in eastern Iowa again, 5 years later, about 60 miles south of Cascade, my-life-on-the-farm story. A much bigger city than anywhere we had lived so far in our 12 years of marriage. John worked for J.I. Case in Rock Island, but we lived in Davenport, the largest of the Quads. For the first year we rented a small house. Very small. We were 2 parents, with 3 wild, loud, rambunctious kids in that minuscule house. Shannon 10, had a itsy-bitsy room that was actually a sun porch off the dining room, which wasn’t any bigger. Josh 6, and Adam 2-1/2 shared a room with bunk beds, right next to our master, which barely held our queen-size. Didn’t realize it then, but renting that house would still have an impact on my life 30 years later. Shannon and Josh were in school, so during the day it was just Adam and me. (Josh and Adam, showing off muscles in their famous tough-he-man-Storm-Troopers-Underoos in that tiny dining room.)

Bored, homesick and lonely, I bravely gathered up Adam and drug him to a nearby bowling alley, 30 Lanes one morning. This wasn’t a normal league. Four mornings a week they had 30 teams of 4 gals each. They were cutthroat competitive, but it was more of a practice league. You paid for your bowling but there was no prize money at the end of the year. This was in the middle of bowling season, so I wasn’t very hopeful. I walked up to the front desk, and quietly asked the lady behind the counter, name-tagged Doris, if there were any openings for a bowler? She swiped up her microphone, and loudly ventured, “Anyone need a sub? This girl wants to bowl!” Geez, I was mortified but a couple hands went up. She told me to pick one, and where to take Adam for daycare. That scary day for me started some of the most treasured friendships I’ve not experienced since. Hooked up with several gals who would leave an imprint on me, plus a few others who would play minor roles in my life.

First and foremost Mary Ellen, who I discovered lived but one block from me. She was 18 years my senior, we seemed like complete opposites, but a special friendship had sprouted. One of her team members had broken her leg, (sorry, but thanks God), so I was asked to sub for several weeks. Idle chit-chat during bowling told me something odd about this loose (not morally) group of women after a few weeks. They had been bowling on the same leagues for years, but did nothing else together. There were about 10 of us who gravitated towards each other. I invited the group over for lunch after bowling one day. To that tiny house that was way too small for any entertaining. We bowled at 9, got done about 11. I had a bowl of potato salad, baked ham and German chocolate cake.

These women had so much in common, kids going to same schools, some had even lived near each another when growing up, but would only casually talk to each other on bowling mornings. Probably big city life, but it just blew my mind. From that first luncheon sprang regular pot lucks, secret sister gifting, state bowling tournaments in different cities each year. All of us crowding into 2 rooms for a weekend of eating out, lousy bowling, playing cards, staying up late. Good times. The most important thing I contributed to the group that clicked with us was playing euchre. They loved to play cards, and had never heard of double deck euchre. Of the 10, about 6 of us would become obsessed with that card game. Four of us would meet every couple weeks, starting right after supper. Playing cards til the wee hours. We would rotate homes, make a gooey dessert, have some assorted Brach’s chocolates, pop, and we were good-to-go. The bid is 5 spades. Umm, I’ll say 6 hearts.

About a year later, we found a house to buy. Big older stucco with lots of room for this loud, crazy bunch. Maybe 4 miles from our little rental, different schools for the kids, older neighborhood. But the friendships were established. Besides we all lived in Davenport, just not next to each other. 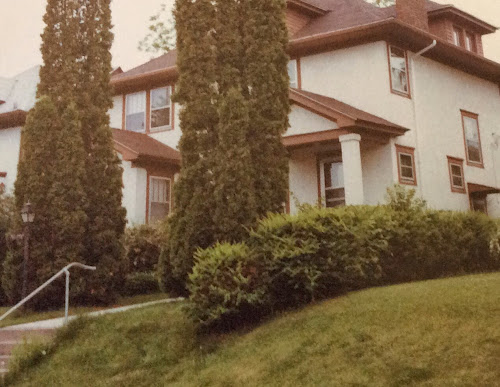 Mary Ellen knew the city of Davenport inside and out. She was a garage sale freak. I was an antique nut. She would find a new interest in antiques, me in going to sales with her. Some of my most prized antiques come from the Davenport area. My 7-foot antique oak bed, a small single door oak wardrobe that had 100 stickers plastered to it when I bought it for 15 bucks. She would pour over the Quad-City Times, starting on Wednesday. In her neat, small cursive script, would list the garage sales for the next day. She would number them, so there was a route by neighborhood, and times. We even got into a couple spats over the years while going to garage sales together. Her daughter Laurie had just graduated from college and gotten a job in Chicago. Mary Ellen was always on the look-out to help furnish Laurie’s apartment. Once I spotted a really cute antique oak night stand, no price. Asked about it. Wife shouts to hubby in the house, “Marv is that piece for sale with the flower pots on top?” Marv yells back, “sure, how about 15 bucks?” I offer 12, she said ok, (without consulting Marv). I piped in, “great, sold!” Mary Ellen was quite mad at me for buying it. Since she was looking for Laurie, that somehow trumped me finding a good deal. You see that huge house I was now trying to fill. I was supposed to give her first dibs on anything remotely cute or antique, that might look good in Laurie’s place. Sorry friend, not in this lifetime. She got over it. Still love that little night stand. Too cute. 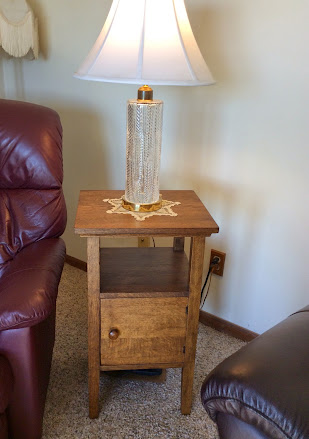 Thee-biggest-die-hard-Cub-fan-EVER. Only way to describe Mary Ellen. One set of her grandparents had lived near Wrigley Field when she was a child. She spent a lot of time with them during the summers, going to the afternoon games, (until 1988 would there be no lights for the hapless Cubbies-actually it’s still lights out for those perennial lovable losers) already keeping a scorecard in second grade. She invited me to take a bus trip to a Cubs game. I really had no interest. Josh had barely started T-ball. (Wait until you read the story on that little escapade). I went anyway. Cubs vs. Cards, major rivalry for decades, who knew? Ok, so after a few games I was hooked. Geez, I even kept scorecards on both boy’s little league games. But we didn’t take the bus anymore. Mary Ellen couldn’t stay awake driving from home from the grocery store, so I did all the driving (remember my 14-year-old-car-theft-felony-story? Still love to drive). We’d stay a couple days in Laurie’s apartment. We usually had something to do for the apartment, painting etc, but got free lodging, plus we went to 2 or 3 games before we headed back home. We went to the Cub’s Winter Caravan tour every year. Still have a baseball autographed with Ryne Sanberg, Keith Moreland, Larry Bowa, Fergie Jenkins and Scott Sanderson. Circa about 1985. 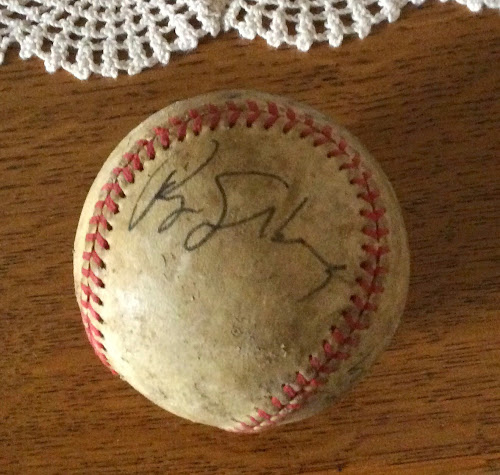 One of my favorite pieces from the Quad-Cities is a gorgeous oval oak library table. Two dudes had their yearly sale and loaded it in my truck. By the time I drove home, it was raining hard and the table was soaked. I tried unloading this mother by myself. As I eased the heavy, wet slippery piece down from the truck bed, one of the legs clipped the curb. The table bounced back up and hit me in the chin. Then it smacked the curb again, breaking off the leg. By that time I was so stinking mad I could have picked it up with one finger and heaved it across the Mississippi. John ended up repairing the leg and my big bruise lasted about 2 weeks. No hard feelings, love that table.

Another collection Fred would get me hooked on was a local icon artist from the Quad-cities named Isabel Bloom. She had her studio a few blocks away. Nestled between the mighty Mississippi and our new (old) home in a quaint little section of the Quad-Cities called The Village of East Davenport. She had discovered a way to create sculpture pottery using Mississippi mud. After it was fired, she would coat this greenish cement with a white-wash, wipe it off, then add a bronze hue. She had started this art form in the late ’50’s, after training with Grant Wood. By the time I moved there in the ’80’s she was very popular. Mary Ellen had several of Isabel’s large statues. Many of the statutes were either kids, angels, animals, and snowmen. I would be content with a couple small pieces for many years. It was always a great gift idea in our secret sister group.

Mary Ellen was really gifted in her handiwork. She could knit and crochet just about anything, plus her cross stitch projects were just beautiful. She made me several ornaments, but one was just a little more special. I think it was attached to a gift one year. It was cute, a knit mouse sticking out of a stocking but didn’t reach such a high status until she made this simple statement, “that mouse in the stocking was so much work and way too hard. I’ll never knit another one.” That bumped it up a notch. (One of my all-time favorite ornaments. A tiny stocking with the little grey mouse. Thanks Mary Ellen!)

There was only one thing Fred was addicted to more than her love of the the Cubs. Smoking. Hooked for over 60 years, she had a raspy voice, bad lungs and circulation. After we moved to Michigan in the late ’80’s, we continued our long-distance friendship. I’d stop for a day or 2 to play cards on the way to see my folks. We’d go to a couple days worth of garage sales, and have a potluck with the group over the next 25 years. We talked often on the phone, and wrote letters. I actually quit smoking on her birthday, May 5, 1990. She would never be able to master that feat. She passed away from COPD in January of 2013, at the age of 79.

A couple weeks later I contacted Laurie asking if there would be a sale? I had given Fred a few gifts, and wanted to buy a couple of her things if the family hadn’t claimed them. Fred’s family decided to have an auction. Late February in Iowa, well you can imagine the weather. We made it, the roads were bad. Mary Ellen’s stuff was combined with a couple other folks belonging’s. But there on a small flatbed were 2 of her large Isabel Bloom’s. Leaned into John and whispered, “I don’t care if it’s my last dollar, I will not leave here without at least one of them.” Got them both. Little guy with the snowball is of course named “Fred.” Mary Ellen would be happy they are now living with me…

One thought on “Fred…”