I met them in 2004. They had stopped coming to church, but Charlie was still driving, doing their banking, getting groceries, taking Opal out to eat and to her hair appointments. Charlie was 96 at the time, his blushing bride of 76 plus years was 94. They got married in January of 1928, months before the devastating stock market crash. They were delightful to visit, but quite reserved. I could tell they had gone through something very painful. But it would take months before they trusted me enough to reveal their hurt parts. Coincidently, they were born the same years as my in-laws. Charlie and Jim were born in 1907, Opal and Mag in 1910. But John’s parents passed away in ’87 and ’94. Charlie and Opal were still going strong. Each would easily pass the century mark. Opal’s 100th birthday party in June of 2010. Charlie was 102 in this picture. 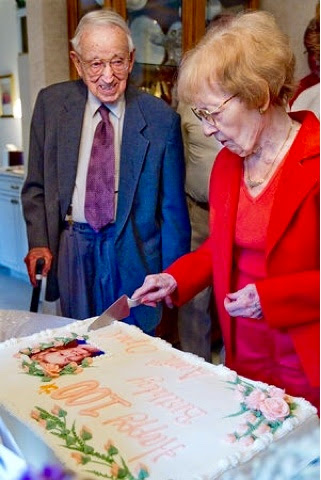 The first big story Charlie shared was that his great-uncle had been the 14th president of the United States. Franklin Pierce. Wow. Charlie was a wonderful storyteller and good with details. His memory was phenomenal. A real history buff. But most of what I learned from and about him was–life he had experienced. His grandmother had been a fur trader and the first woman to open a trading post in Michigan. He was more proud of her than the great-uncle-president-part. After awhile Opal would start rolling her eyes when he began rambling through yet another tale. Had to feel for the woman though. If I’d heard the stories 20 times, she’d heard them 10 times that during their three-quarter’s of a century together.

Opal was still a petite blond (with some help). Her health was pretty good. She had suffered through a horrific case of shingles years before which had settled on her face. The rest of her life she suffered debilitating nerve pain through her right eye. Probably the reason she no longer drove. She was a gifted organist and piano player, had taught lessons for many years, and belonged to the Organ Guild. She looked like a small child sitting on her huge organ bench in her house. She needed to be encouraged, but once she found her rhythm, it was a joy to hear her play. She was a great baker and made plates of Christmas goodies, gifting me (and here I was bringing them food) for a couple years before she started getting forgetful.

Charlie was famous for his peanuts. He kept a cooker in the basement and EVERY time for the first 5 years I was over for a visit, he would head to the basement to fix me a container of freshly cooked, salted peanuts. When I walked into weekly staff meetings, their first question was, did you see Charlie and Opal this week? I always brought some of Charlie’s famous peanuts to share.

They met as teenagers. Charlie was at a friends house, when out of the corner of his eye, he spotted a beautiful platinum blond walking through the hallway. When re-living this bit of their history, Charlie grabbed Opal’s hand, his chin quivered and he’d said reverently, “I thought she was the most beautiful angel I had ever seen. I knew right then and there she was the girl for me.” Opal smiled shyly, patted his hand and quipped, “say what you want Charlie. It’s not going to help you out tonight!” She had a wicked, risqué sense of humor that coursed through her, and if ANY innocent comment could be construed with a double entendre, she’d giggle helplessly for 10 minutes. Charlie was much more social, Opal more reserved (except-for-giggling-fits-over-hidden-meaning-dirty-jokes). Each year that passed I begged them to let me contact The Today Show, Good Morning America, or at least our local newspaper for recognition of yet another one of their milestone anniversaries. Charlie was always agreeable but Opal would say, “aw people don’t want to know that stuff about us.” She was very private.

We became fast friends. Had them over countless times for supper. They loved to play cards, always men against women. Gin rummy. He’d tell stories about Lake Michigan, Muskegon Lake, the Causeway between cities when under construction, hunting squirrels that Opal would can. Now that’s something I’ve never given any thought about trying to preserve!

Charlie got a job at Amazon Knitting Company after he finished 8th grade. He almost got fired the first day. The 5-story building was filled with huge knitting and sewing machines which employed over 500 people, mostly women. Charlie was hired as a sweeper. He wanted to show them how ambitious he was, so was sweeping with great enthusiasm and fervor. The fibers from all that yarn had been quietly piling up on the floor. Soon Charlie had yarn dust flying everywhere. It actually stopped several of the knitting lines because the dust entered the machines, halting production. Chastised, he soon learned how to carefully sweep the fibers and keep them from heading upward.

They had an only child, a son Charles Jr. nicknamed Buddy, who died at age 22 from a ruptured appendix in 1950. This was such a painful part of their lives, I just couldn’t ask any questions about him or his death.

Charlie had just traded his Caddy for a Lincoln. After a couple months he told John he hated the Lincoln. It was too big for the garage, and it was sporting several new dings to prove his point. He took the Lincoln in to trade and got another Caddy. A couple weeks later we stopped to pick them up for supper, (we always insisted on driving when we went anywhere with them, sorry Charlie) he was still moaning about his ordeal with the car dealer. The problem? He had planned on financing part of the car, and they told him he was too old for a loan! He needed to pay cash. He was 99 at the time. Hilarious. Paying for the car was not a hardship for him.

By this time he was facing some physical challenges. Walking wasn’t easy and he was losing strength in his legs. He asked John to get information on those elevator chairs you put on stairs to glide you up and down. John gave him the info, Charlie ordered 2 so he could still use the basement for his peanut frying hobby. Plus he had an office and his bedroom upstairs. Opal too was having some health issues. Her forgetfulness was getting worse. Then she fell in a parking lot suffering a couple of back compression fractures. Her spine just kind of collapsed on itself. She had surgery, needed some rehab. The place was nearby so Charlie could visit everyday. Later, he broke his shoulder slipping on the ice, trying to put his garbage container away. He never remembered anything after falling outside that frigid night. Told me countless times, in tears, it was God who picked him up, brought him back to the house, woke up Opal so she could call 911. He had seen God plain as day that night. I never questioned this because I believed him.

One day while I was visiting, Charlie showed me some papers. They were dated back as far as 1914. His school achievement certificates for perfect attendance. I told him if he ever wanted to part with any, I’d love to have one. “Please pick one, they’ll just get thrown out after I’m gone,” he assured me. I did, though not the oldest one. Took it immediately to Hobby Lobby to have it matted and framed. Hung it in our front hallway. A few weeks later when they came over for supper, I stopped him after he walked through the front door. Pointed to his framed attendance award and told him how proud I was to have it hanging in my house. He got out a hankie and just stared at it. Grabbed and patted my arm, sniffling said, “Denise, it’s me who’s honored by what you’ve done. Thank you.”

(Charlie’s framed certificate is packed away while we wait-slowly-for our house to sell. This is one of my brother Larry’s awards I just found, similar, but missing the Michigan state seal, and of course 40 years later).

Charlie & Opal are now reunited with Buddy. The raw pain of the loss of their only son no longer etched on their faces. Charlie died peacefully at home a couple months after his 103rd birthday in January 2011. Three weeks shy of their 83rd wedding anniversary. Unbelievable. Sharp until the day God took him home. Didn’t think Opal would last long without him. She was pretty forgetful and could no longer stay in their house alone. Moved to an assisted living place with her piano and lived about 18 months until June of 2012, a couple weeks after she turned 102. She had some razor sharp moments and I got her to play for me a couple of times. One visit we went for a walk through the halls, then back to her room and sat on her bed. I handed her chocolate chip cookie I had brought. She looked over on her night stand and spotted a piece of paper. “What’s that?” I picked it up. It was a note from her niece, so I read it to her. Said something like, “Hi Aunt Opal! I had such a nice time with you. I won’t be able to come and visit you tomorrow because I have to stay home and do my hair.” Love, Dawn. Opal turned her head towards me and said incredulously, “what a crock! I’ve seen her hair. That DOES NOT take all day!” My turn to laugh. Thanks Opal.
Charlie & Opal, both in their upper ’90’s, standing in front of their fireplace. I have never met another couple before or since them more devoted to each other.

Not in a mushy way, but in a quiet, dignified, serene way. Made you feel warm and envious of what they had and shared. Although it was only 6 years, it was an honor to know and love them. Thanks God…

One thought on “Charlie & Opal…”