We were in for some big changes when we moved to Michigan in 1987. One I still can’t get used to is Eastern Time Zone. Mid-June it doesn’t get dark here until 10:30. Then the news comes on at 11. Just not right.

Michigan’s weather was similar, but Iowa was still the winner in heat and humidity during the summer, and colder temps in the winter. Michigan might get the nod in the we-got-more-snow-award-nah-nah, but Iowa usually wins any “extreme” category. Soil was different too. I was used to seeing inky black Iowa dirt, best in the world for growing crops and feeding millions. Now we were surrounded by sandy beige soil everywhere. Looks like a spec house, let’s-keep-all-things-neutral. Great though for all the fruit growers here, and a canner’s paradise.

Education was a big wake-up call after we moved. Shannon was 16 and had been in an accelerated program in Iowa. Basically, there weren’t many classes that Jackson Public Schools could offer. I don’t remember where Iowa and Michigan were on the state’s education ranking scale, but Iowa was closer to the top than Michigan. Shannon spent most of her 2-1/2 years there by herself, doing independent studies, or taking courses at Jackson Community College. Worked out great when she tested out of almost 2 years of college by the time she was at Michigan State. Things you take for granted until you don’t have them anymore.

The most beautiful resource in this part of the state is Lake Michigan. Part of the 5-pack-Great-Lakes that accounts for almost 20% of the world’s fresh water. (Nothing against my favorite spot east of the Mississippi, Niagara Falls). Lake Michigan is the only one of the “Greats” that is wholly contained in the U.S. She can be as flat as a pancake, or have 15-20 foot waves, ranging in color from sage to olive green, steel grey to brown, turquoise to royal blue.

Breathtaking isn’t it? The color grey usually means trouble in a weather sort of way. Brown means strong winds from the west and we’re getting tons of sand from Milwaukee. I have been smitten with her since we moved to North Muskegon 20 years ago. Although I love LOOKING at her, doesn’t mean I like BEING ON her. She’s 600 feet deep. Who needs that? Not this keppi-strunt Iowa Dutch girl. Plus I have a huge problem with boats without brakes! Where’s the engineering genius in that?

Guess the main reason I love being by the big lake still has deep ties to my upbringing in Iowa. No one ever gives much thought to looking across the horizon in Iowa. Try it, you can see FOREVER. Once I moved to Michigan that huge difference was very apparent. We have a lot of water in and around Michigan. The Great Lakes, (each one totally awesome) plus hundreds of smaller lakes. But what isn’t doused in water seems to be covered with trees. Billions of trees. Going down a 2-lane hi-way reminds me of a Stephen King novel. Trees on both sides of the road, filling up the ditches, getting all touchy-feely in the middle of the road above you. 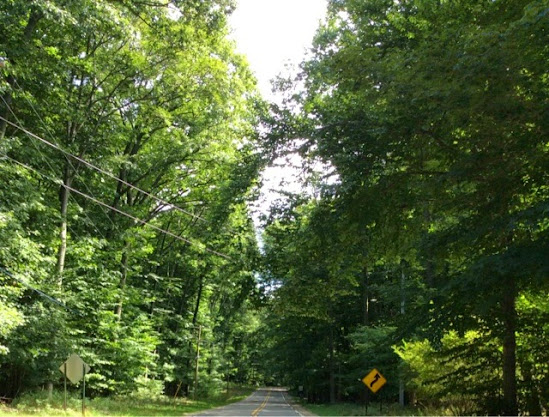 Creeps me out. Wasn’t what I was used to, not being able to see 2 feet in front of my face. The only place a good old Iowa girl can see any distance at all is by Lake Michigan. Trust me, they’ve probably tried to grow trees there too. Days that are very windy, first thought that pops into my head-gotta go visit the big lake. Huge white-caps rolling in, sounds of the waves, and blowing sand reminds me of very fine snow (fine as in small, not as in wonderful) of an Iowa blizzard. 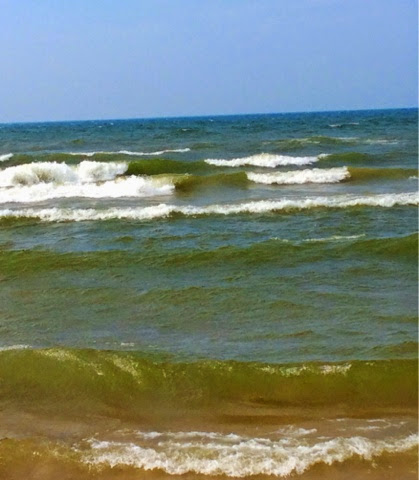 I’ve gotten quite demanding with my wind issues here in west Michigan. Love it windy during the day, but want it calm at night. Then the city lights from Muskegon reflect off the water and ripple right up to our back yard. Absolutely stunning! Hey God, don’t ask for much do I? Always surprised (and thoroughly disgusted) when I happen to mention I’m headed to “The Lake.” Folks around here casually say, “gee, haven’t been there for a couple years.” What? We’re a tad over a mile away by boat, maybe 4 miles by car. How can you not go gaze at one of God’s most awesome bodies of water-ever? (Gotta learn how to compel people like in True Blood, but without becoming a vamp) When the wind is howling, there’s something very peaceful about watching the lake just for a few minutes. Makes me feel small, even insignificant, but in a very good, spiritual way.

I’ve always maintained that Lake Michigan has some identity issues. She’s so big, she likes to throw her (water) weight around by making her OWN weather. (She’s been pitching for her own series on The Weather Channel for years). This puts her on a major power trip. We don’t get a lot of sunny days here, another biggie I miss terribly about Iowa. The day may start out sunny at 7 am, but before noon the clouds are everywhere. Many days are glum, and we’ll have several in a row. Depressing. During our long, seemingly endless winter, the rest of the state will be getting the predicted 4-6 inches of snow. Most winters though, Lake Michigan’s open water temperature is warmer than the air. So as a cruel joke on us for living so close to her, she produces extra snow (lake-effect) by the lakeshore. Ha-ha. Yup, she’s a card alright with a wicked sense of humor. We may get 12-20 inches instead of the 4. She’s pretty powerful and knows it. Tends to flaunt it now and then. I’ve always thought it was either an inferiority complex because she’s not the biggest, or she’s just pissed off because she wasn’t named Superior… 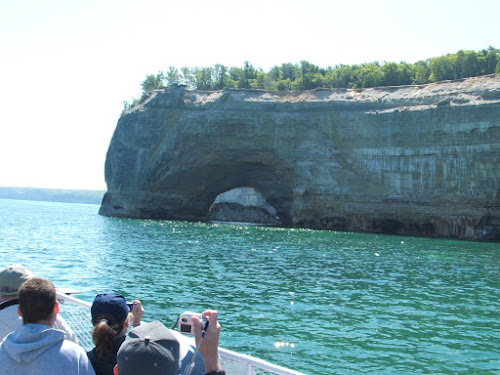 One thought on “Un-obstructed view…”