For the last several years of Mom’s life, my trips to Rock Valley were much more frequent. I flew about every 3 months, staying with them about a week at a time. When Mom got non-Hodgkin’s Lymphoma, she immediately went to the hospital in Sioux Falls to start chemotherapy. The cancer in her chest was fast growing and she was having trouble breathing. But it also responds quickly to treatment. After the initial scary first treatment, she was already breathing better. She was scheduled for quite a few treatments, but after 5, she suffered a stroke. There was definite weakness on one side. That was enough chemo for awhile, the cancer was being held at bay, so Mom went home. That propelled Dad into caregiver service, a job he was neither trained for or ever wanted.

All of his “good works” activities that gave him his sense of satisfaction and self-worth would slowly be pushed aside as Mom’s health deteriorated. I know this is what marriage is all about, but they really didn’t have the most conventional marriage. He kept a few activities at first, a bible study at Valley Manor, men’s prayer breakfast, but his favorite, the prison ministry came to a screeching halt. I think he was pretty bitter.

Mom tried physical therapy for a couple weeks, but gave up on it way too soon. She would never walk unattended again. Their life after they retired had been easy, even enjoyable up to this point. Mom and Dad enjoying a meal (a pretty regular occurrence) out in Rock Valley a few years after retirement, late ’80’s. 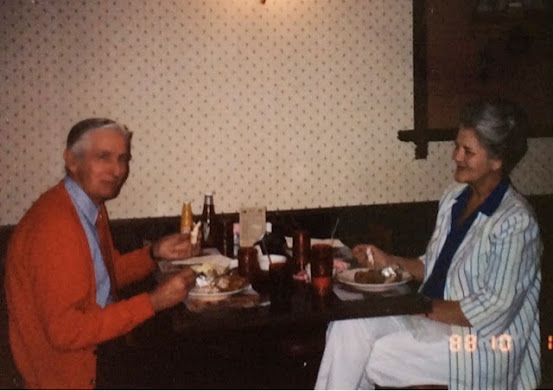 They frequently went out to eat, but after her stroke, Mom didn’t eat quite as neat as she used to (everything about her was neat-neat-neat-see above). She was convinced when they were eating out at their favorite hangout in Sioux Falls, The Royal Fork, that some guy was watching and making fun of the way she ate. Even though she was easily transported using a wheel-chair and walker with Dad’s help, eating out and shopping trips were a thing of the past. Dad often would stop somewhere for take-out, but he was not and would never be a cook or a shopper.

Both of them were on a decline. Dad nearly 10 years older than Mom, was now pushed into caregiving duties. To make matters worse, he didn’t have a clue how to do a little manipulating of his own on her. He would say, “Florence, you hungry?” Well, no she wasn’t. Mom had lost her appetite, and soon would lose her will to live. When I was around, I’d just plop a couple of slices of pumpkin bread slathered in butter in front of her. Two minutes later, they’d be gone. He just didn’t have those instincts, or it was too much bother.

Though Mom was limited somewhat physically, she was still razor sharp mentally (except for the ill part) and never gave up her alpha status at home or in the family. She always encouraged me fly home, landing in Sioux Falls. Without my own car, she had much more control over what I could do and where I could go. I was there to help them, not shop or visit friends. First piece of business after getting my stuff in the house was the mile-long grocery list. I wanted them to have homemade food to choose from and eat when I wasn’t there. I divided all the meals individually, and froze everything. Typical menu for my cooking experience would be roast beef and meatloaf dinners, spaghetti, chicken, pea, (whole not split) navy bean, and vegetable beef soups, banana and pumpkin breads, chocolate chip and sugar cookies, white rice made with milk, not water. I’d put this ton-o-rice in 8 oz. containers with a pat of butter, then cinnamon and sugar on top. Of course fudge and penuche for her sweet tooth. Plus a big bowl of potato salad and taverns on my last day.

I always included a written, detailed chart of what I put in the freezer, where everything was, top to bottom, left to right. Listed all the meals, what kind containers, what section of the freezer they were in. Dad suffered terribly from the same ghastly affliction as my husband John. Neither could spot a gallon of milk in an otherwise empty fridge.

Sometime during the week, I’d fix a turkey supper with dressing, cranberry sauce, pumpkin pie (a given by now, of course REAL whipped cream). We’d have company for this meal, usually my friend Char and her mom, or sometimes Mona. They’d come over and visit for at least a couple hours before we ate. This particular time, Char and Esther were sitting in the living room, just a-yakking away with Mom and Dad. I was in the kitchen (surprise). Supper was a good 90 minutes away, and I thought I had just enough time to sneak in a batch of candy before I needed to get serious with the potatoes and gravy. There I stood on my usual perch at the stove, half-listening to their conversation (this was BBD, before becoming deaf). Wow, it had gotten awfully quiet in the other room. What’s going on? Silence, not one word spoken. Had Dad said something to offend someone? Suddenly I hear Mom yell, “Denise, are you making a batch of fudge? You’re stirring it too much, it’s going to get sugary.” Oh Mom…