After Larry had been killed, Mom developed or acquired some irrational fears for and about me. I understand how that could happen, but back then it wasn’t easy for a ten year old.

Here’s a good example. My best friend growing up was Char. She came from a large, normal, mentally healthy family. Her parents had several children, took a baby break for a few years, then added 4 more daughters. Yikes. The first set of kids were gone by the time Char and I became fast friends. Char was the second oldest in the last batch of their kids. These 4 kids had specific chores everyday or week. I had none, zip, zero, nada. Each one had to either bake, dust, mow, weed the garden on Saturday’s. Their mom, Esther was pretty lenient about who did what. If you loved being outdoors, or enjoyed baking, well, that was your chore.

My mom never let me NEAR a lawn mower. She was convinced that a rock or a piece of coat hanger wire would fly through the blades, out of the mower, pierce my heart, killing me instantly. Even at 10, that sounded a little “off.” Thus, if I happened to be over at the Schelhaas compound when one of them were doing yard work, I’d beg to push the mower for a few rounds of the yard. That sounds kind of crazy too, what kid ever “wants” to mow? Guess that was Neese (doing what I did best) in my first of many stages of rebellion.

Mom was nearly paralyzed with fear every time I got on my bike. At the time I really thought I had the “run” of my great little town, Rock Valley, but there were many places where I was not allowed to go or ride bike. Never near hi-way 18 where Larry had been hit, even I could see and agree with that logic. But the dump, Rock River, Van Zee’s Sandpit, Benson’s Hill, the Park, even the swimming pool at first. Anywhere near railroad tracks or bridges were off limits to me. Every time I got a cold, sore throat, or childhood disease she was convinced I wouldn’t live through it.

I guess she tried to make up for these phobias taking over her life and mine by allowing me to do nothing. I did no dishes, cooking, never a load of laundry, no dusting, never swept, vacuumed, or washed a car. Sounds like I was spoiled rotten right? Well I was, but in reality, this was turning into a very unhealthy relationship for both of us. I wanted to be in the kitchen, learning how to cook and bake like the rest of my friends. But Mom wouldn’t let me literally or emotionally. If I mentioned I was hungry for fudge, apple pie, cinnamon rolls or spaghetti, it wasn’t long before she MADE it for me, but never WITH me. Wouldn’t let me help in the kitchen. 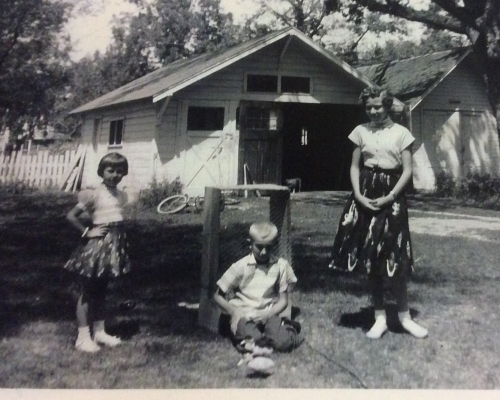 Maybe this was one way old dealing with her grief, but it would put a barrier between us that would take decades to fix. And what about poor Mona and Dad, neither very high on her priority list? Well, Mona had just gotten married, so she was out of the house. Dad would find other things too. Volunteering for several duties at church, the Consistory, Sunday School teacher, and the M-2 program with inmates at the Sioux Falls, South Dakota prison. Should also point out that this “absolutely no experience” with anything to do with housework, cooking or baking was pretty tough on John and I when we were newlyweds. More on that fun subject later!

Mom somehow managed to stay detached, but overbearing, smotheringly close on anything to do with me. But she became an introverted loner with low self-esteem. The closest I ever saw her returning to “the normal Mom” I remembered was after the birth of her ONLY granddaughter. Our firstborn, Shannon Marie born in December of 1970, a little over 12 years after Larry’s death. That short window however, would not last very long. On the plus side for me, her unhealthy need and ability to dominate and manipulate every facet of my life, bar none, had finally come to an end. But for Shannon, it was just beginning…