We were attending a huge, beautiful downtown church that had seen better days. When under construction in the late 1920’s, it had come so close to bankruptcy that a handful of families from the congregation invested their own savings to finish the building or the Catholic Church was going to snatch it up. At that time, downtown Muskegon was bustling with retail businesses, lumber barons, doctors and lawyers. These well-to-do folks lived nearby, most of them walking to church on Sunday mornings. Central boasted 3 services, packing the sanctuary with its 1600 members.

Central, following God’s instructions to go forth and make disciples for Christ started several seed churches over the years that were now in the burbs. When a new church cropped up 5 miles away, it didn’t take long before housing additions and new schools were added to the mix. A good healthy growth spurt for these outlying areas and congregations. For Central though, not so much. The downtown area was looking run-down and dreary. Closed stores, abandoned factories. A new mall had been built a few miles south, unemployment was up, and the city population had dropped. When we joined Central in 2003, they were averaging about 275 in 2 services. Congregation size was maybe 450, but many were not attending regularly because of their age or health.

Years before one couple had suffered a terrible tragedy. A member’s parents had been in an accident. One parent had died, the other critically injured. The daughter tended to her parent, but noticed very little attention was given by Central’s clergy or staff. When this parent passed away, she donated money to start a fund at Central to hire someone specifically to visit shut-ins (not a good term, I hate it, but it suffices here). There were strict guidelines for this job description that I did not know for most of the decade I held the position. 1. Don’t use hours on other staff related activities. 2. Don’t combine this work with any other duties. 3. Keep a journal of those you visit. I did # 3 extensively. Writing, figures.

When I was hired, this special endowment fund had ballooned to gigantic proportions. My salary wasn’t even using the interest it generated. This parish visiting position, the continuing education classes, mileage, seminars on dementia, aging, caregiving, burn-out, end of life directives, and books were all paid for by this fund.

Started out with 10 hours. Spent a couple hours each week making cassette tapes, later CD’s of the Sunday service, stuffing them with bulletins and mailing out about 25 a week. Something I should not have been spending time on. Plus staff meetings every week. Almost half my time was used up before I saw a soul. Used to tell the minister, “when I’m in this building, I’m not visiting.” With about 50 folks on my list, being able to see only 6 folks a week, it wasn’t long before my hours were bumped to 20.

I had a couple volunteers who were awesome. They each saw about 5 people a week which helped tremendously. But it was MY job to visit these folks. Just because they were seen by Sue or Betty didn’t mean they shouldn’t be visited by me too. Once a month, I’d have the volunteers over for lunch or treat them somewhere and we’d go over the list of those we visited. Most on my list were in independent or assisted living. Some folks were on the list only a short time. Knee or hip replacements with a stint in re-hab requiring visits for 3 or 4 months. Others, already in nursing homes with no chance of ever returning home. Quite a few couples, still in their own homes, were struggling with health issues.

Two aspects of the job really sucked. Foremost, it was the deaths. A small sample of funerals announcements of folks I lost. 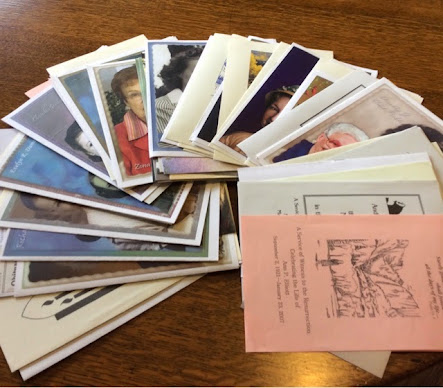 Being part of an older congregation meant losing folks at a depressing, alarmingly fast rate. Averaged almost one a month during my tenure. Visiting someone for 2 or 5 years, sharing stories, fears. Then all of a sudden you aren’t typing their name on the list for the next month. A huge loss for me to get past every few weeks. Really got me down at times. Shannon warned me, “Mom, spending so much time with the elderly, you’re bound to lose them.” Some deaths were much harder on me than others. I hate to say I had favorites, but I guess I did.

The other very unpleasant aspect of being on staff was church politics. Who knew a church could be as cut-throat as a Fortune 500 company? I worked for one preacher-boss,who when starting the weekly staff meeting would use the catch phrase, “after much prayer and discernment.” I just cringe. He fired more people than Donald Trump on the Apprentice. He even fired volunteers. At times their tactics could be compared to the dirtiest-mud-slinging-smear-campaign-ever. Makes you not want to be associated with organized religion.

Years ago I was visiting a wonderful lady named Ann. Ready to leave and I offered a prayer. She grabbed my hands and said, “Denise, let me pray for you and your wonderful ministry. It means so much to me and the rest of the folks from Central who you visit. Let’s give thanks to God today for you.” WOW, just WOW.

United Methodist’s have a business meeting called a charge conference once a year. Decisions on pastor’s salary, pledges, parsonage, membership, etc. But this particular preacher-boss wanted to hear a tidbit from each staff person. Man, this is so not me. I can’t get in front of people, my knees shake and my voice quivers. All he ((boss # 1 of 4 preachers) wanted was a 2 minute description of what I did. So I wrote a poem. That way, I would only have to glance at people occasionally, plus I was sitting down so my knees wouldn’t shake. I hoped. Not much I could do about my quivering voice. I still have the poem after 15 years and although I’ve retired, my feelings about how this job called me have not changed.

I got a request the other day from someone in my church.
He asked if I would say a few words-my heart took such a lurch.
My head, it started pounding, my mouth went dry as cork.
How can he ask to explain this perk that most call work?
My thoughts went back to Moses, who thought himself inept,
When asked by God to lead them out, he argued, whined and wept.
And so I wrote this ditty, because I cannot speak,
For if I tried I front of you, I’d mumble, stammer and weep.
Although this poem is silly, my job is serious work.
I just can’t speak off-the-cuff, I have too many quirks.
Wasn’t so many years ago-when God first spoke to me,
“Denise would you stop running around and do some work for me?”
It wasn’t like a statement so bold in letterhead,
But more just like a whisper inside my busy head.
I’ve one good ear, the right one, don’t hear much on the left,
Somehow God must have known which one I have is deaf.
For it was very clear that day, no muffling voices pondered,
That God had bigger plans for me to my amazement and wonder.
He spoke of special needs in church, enough to fill my cup,
He’d pave the way for the preacher for me, all I could say was “yup.”
There was a gap that I could fill, since “seniors” are a treasure,
He told me to go visiting, and “bring treats along for good measure.”
The job, though kind of scary, has brought me contentment and gain,
For when I’m visiting people, it’s peace that I attain.
You think you’re helping someone else, that’s how it usually goes,
But somehow when the visits done, it’s my spirit that glows.
God asked for help, and I said, “yes,” I listened to His plea-
But while I was helping others, He was helping me!
I wonder why He spoke to me, He wanted help, I listened,
And how the pieces fell in place the day my heart was glistened.
So if I call for a visit, for pete’s sake please say yes.
The time will fly, we’ll hug goodby, Our Father always knows best…