I’ve always been drawn to “older folks.” When I was very young, one of my favorites was my neighbor, Bessie Jacobs. If I was too sick to go to school and Mom was working, I’d stay with Bessie for the day. Then there was the little-off-kilter, but utterly fascinating Rozina Henningfield. She was different, but had very cool stories to share. Kathy came to live at Valley Manor when Mom worked there during my elementary and junior high years. When I’d walk in, Kathy would grab my hand and off we’d go. Stopped in most of the rooms to visit the residents, but I did all the talking.

Ivor and Gertie Dearborn were an elderly couple who lived 2 blocks away on 15th Street. Ivor was spry, but Gertie was frail and needed help. Mom worked for them for years, caring for Gertie, cleaning and cooking. Fixing their meals was a bit of a challenge for Mom because the Dearborn’s still used a cook stove. Ivor would tell Mom what kind of wood to use for whatever she was cooking. They were a truly devoted couple who were a joy to watch, listen and talk to when I was a kid. Clarence and Ida were an older couple who lived next to us in Hinton when we were young, inexperienced parents. Their only “child” was a yippy-snippy-nasty-coffee-drinking-cigarette-smoking-chubby-Chihauhau named Ginger. She used to sit on a “throne” about table height with a lit cigarette in her mouth. Head tilted way back to keep the smoke out of her eyes. I kid you not. She had her own coffee cup too, though preferred to lap it out of the saucer. Had to watch baby Shannon like a hawk around Ginger. She (the ornery dog) was used to being the only princess in the house, and truly did not play well with others. Or share well in the affections of her 2 biggest and only fans.

I’d rather you didn’t ask me to teach Sunday or Vacation Bible School. I happily admit to being-quite-partial-to-kids-and-grandkids-from-my-own-gene-pool. But you can always count on me to bring and “seniors” cookies, breads, soups, or canned goods. Plus hold their hand while they reminisce through their lives. I was born loving old people. The gap difference though in our ages seems to be closing at an alarmingly accelerated rate lately.

I was working part-time as the Parish Visitor at Central United Methodist Church in Muskegon. Once home to over 1600 members during the ’50’s and ’60’s, the congregation had shrunk big time. Wealthy folks who had lived, worked and worshipped in the downtown area had moved out to the burbs. Our membership might total 500, but about half that attended regularly on Sunday mornings.

I’d seen this odd couple in church several times. To be truthful, I thought they were homeless and came in to escape the cold. Pretty sure they were a mother-son duo. She was quite old and frail. He was tall, skinny as a rail, and used a walker. Then there was his hair. He dyed it pitch black, but honestly every week it looked as though another dye job was 6 weeks overdue. The mom passed away and sonny stopped coming.

Preacher-boss-#-2-passing-through-my-life asked me to add a new name to my always growing, changing parish visitor list. A man named Charles. He lived just a few blocks from me in North Muskegon. Until he opened the door, I didn’t know he was the tall-skinny-walker-bad-dye-job-guy. And he was just a few years older than me. Hmmm, that was gonna be different. Charles was suffering from a very serious kidney ailment. Soon learned what foods I had to steer clear of when bringing him stuff. Nothing with bananas, beans or potatoes. This was part of the reason I kept such comprehensive journals. I wanted to be able to say, “how’s your granddaughter Emma doing with her new baby Ethan?” If I didn’t write some of this stuff down to bring up to my-brain-front-and-center when I walked in, I’d get mixed up or forget. All kinds of information stored in individual little people boxes, usually in my head, but not always. Whose son was going through a terrible divorce or which nephew was recovering from serious surgery. What the heck was that dog’s name? He looked as though he wanted to feast on calf-of-Denise-for-his-afternoon-snack.

Wasn’t exactly sure what was different about Charles. Our chaplain thought he might have Asperger’s Syndrome. Charles had detailed, vast knowledge that he enjoyed sharing on certain subjects, but trouble relating one-on-one-with-what’s-going-on-in-your-world-today-conversations. He had some dear devoted friends, Al and Nyla. A wonderful couple from Grand Rapids (50 miles away) who came to visit him every Wednesday. That was Nyla’s day off. She was still working full time as an R.N. They ran his errands, paid his bills, looked out for his best interests as his guardians and advocates. I discovered it was more enjoyable to visit Charles when they were at his house. If I arrived before they did, Charles would bark out orders like a drill sergeant. “Start the coffee, take out the trash, turn down the heat.” (He did have it about 85 in the house most of the time. No meat on his bones, he was always cold) Once Nyla and Al got there, Charles appeared to be watching a tennis match. His head would bob back and forth, listening and watching Nyla and I talk. He would occasionally contribute to the conversation? I learned that Nyla had grown up just a few miles from me! Small world instigating some great conversations about our dearly-beloved-northwest-Iowa-stomping-grounds.

Charles had some really different collections. Flashlights. Thousands of them, ranging from 1 inch to 3 feet tall. Some very pretty neat paper weights too. Here’s one that belonged to Charles that I bought at his estate sale. 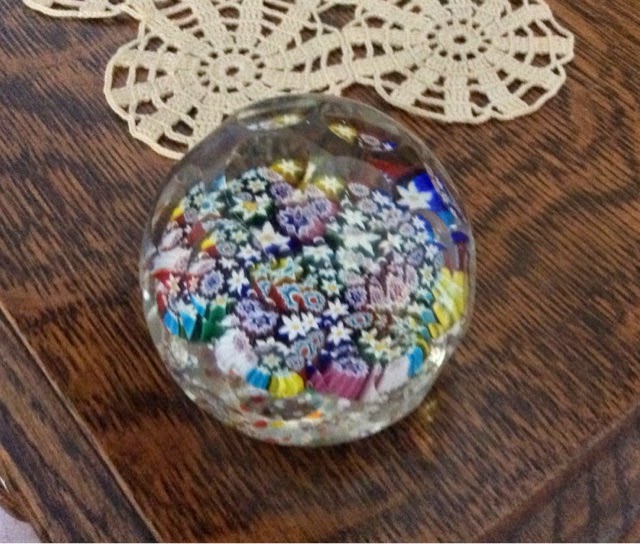 One of his bedrooms was sound-proof recording studio. What he recorded I never knew. Then there was the gigantic pipe organ in the basement. He was so infatuated with the organ that he had a special furnace and de-humidifier installed to keep it from going out of whack. He used to beg Nyla to go play some of his favorite hymns when she was there. I never heard him play. He was too sick to go down the basement, but he must have been pretty talented. He once played the organ at the Crystal Cathedral in California. I don’t think he played during a service, just got to play it for awhile. These pictures are when Al and Nyla took Charles along on a trip to California.

Charles went steadily downhill over the next several months. Although it’s been almost a decade, one of my biggest regrets is that he died alone in a nursing home about a mile from my house. He must have been so scared. Yeah, I know, he was never alone. God was there. But to a man like Charles, I think he would have been terrified. He had many child-like qualities. He would have felt comfort (certainly me too) if I’d been there to hold his hand when God was taking him home. I saw him a couple days before he passed away. He was laying on his side, eyes closed, groaning softly. I touched his shoulder. “Charles, what’s wrong? Are you in pain?” He grimaced, “I have so much pain in my legs.” I offered, “what can I do to help?” Do you want me to find a nurse?” He shook his head. “No, don’t bother. Will you put a pillow between my knees?” I did and the pain seem to ease somewhat. He grew still, fell asleep and stopped moaning. I said a prayer with him and left.

A couple months before, he had been hospitalized, fitting him with a permanent feeding tube. I stopped to see him. He wasn’t doing well. He had lost so much weight off his thin frame. Dialysis, though keeping him alive was taking a huge toll. That took several hours 3 times a week. Just getting in and out of their transport van was exhausting for him. He looked miserable. I made small talk for a few minutes, then he fell asleep. I sat by his bed for awhile, then got twitchy thinking of the rest of the folks I still wanted to see that day. Plus he was sound asleep. All I did was pick my purse up off the floor. One eye peeked open, he stared at me, and made this peculiar statement, “don’t go gettin your eagers,” (which I understood to mean, please sit still and stay with me a while longer-even if I fall asleep). Never heard it before or since, but this was where I needed to be. So I stayed with my quirky friend Charles…